Happy New Year! In the waning days of 2016, I was reflecting on the past year and its highs and lows, events and happenings, and blessings and turbulences. It was also a simply amazing debut year for Bounty from the Box! Because of the nearly 400 farms and related organizations mentioned in the book, BFTB had […] 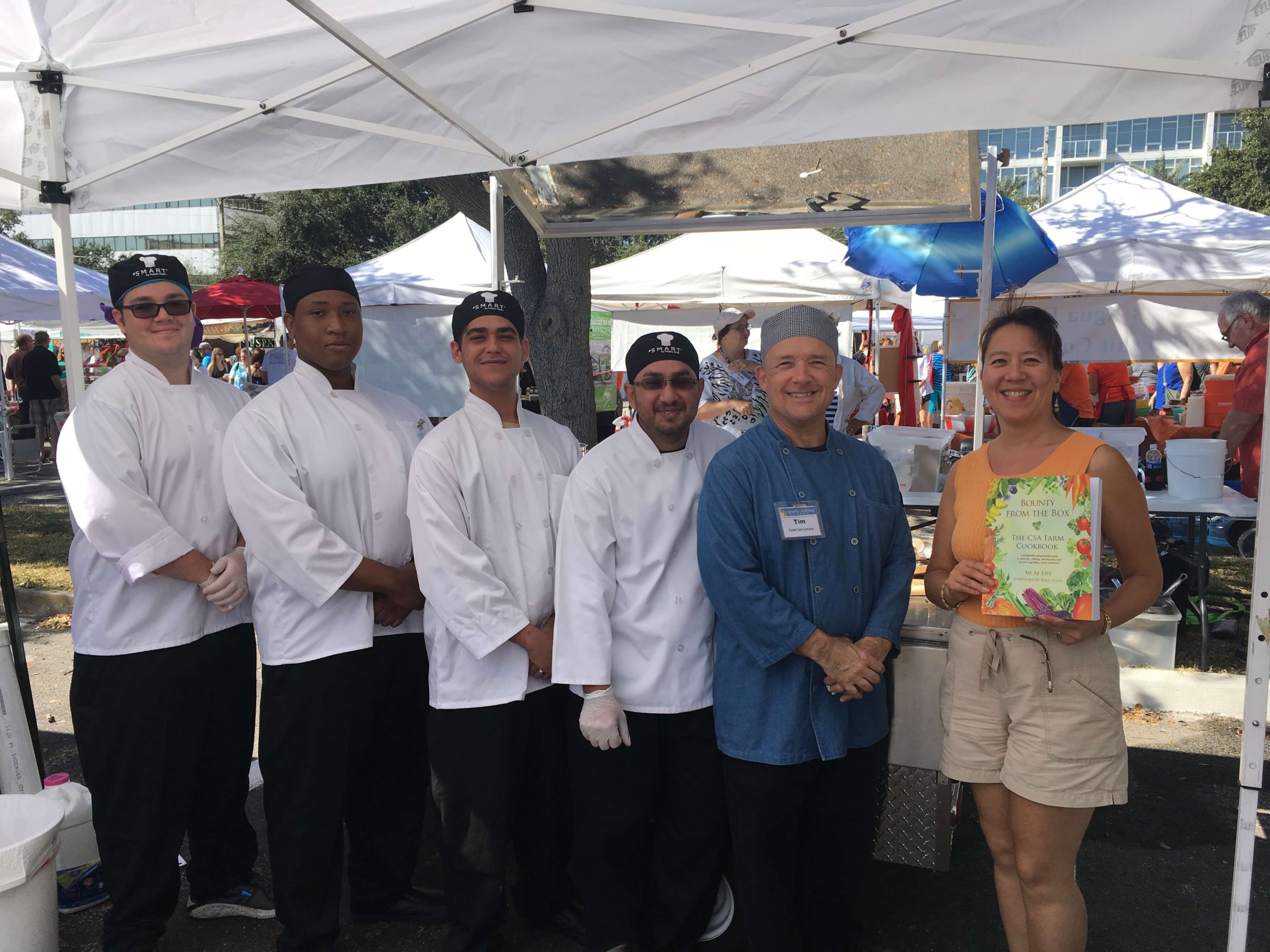 Happy New Year! In the waning days of 2016, I was reflecting on the past year and its highs and lows, events and happenings, and blessings and turbulences. It was also a simply amazing debut year for Bounty from the Box!

Because of the nearly 400 farms and related organizations mentioned in the book, BFTB had something of a family already when it came out in the fall of 2015. Thanks to the huge generosity of these places, as well as the amazing team that worked with me to create and launch this book, 2016 was the year of travel and book tours. Events close to my home in the Pacific Northwest kicked off the year in March, first with a talk at Nash’s Organics in Sequim, Washington, followed by an appearance at the CSA Share Fair in Portland, Oregon, where I shared a table with Gathering Together Farm. 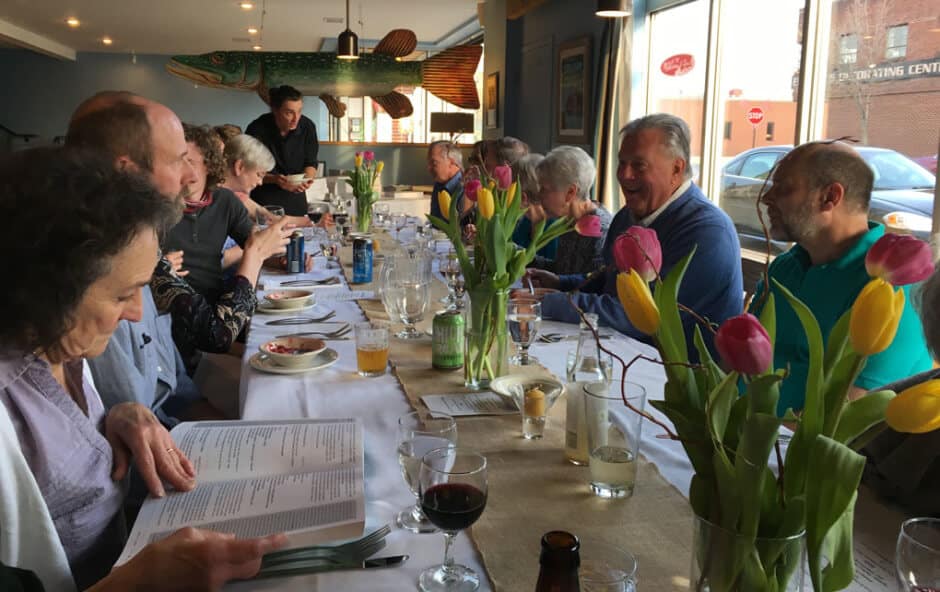 “Dinner with the Author” at the Blue Heron Coffeehouse, Winona, Minnesota, April 16, 2016.

In April, the Blue Heron Coffeehouse in Winona, Minnesota, generously prepared an absolutely delicious four-course “Dinner with the Author” featuring recipes from BFTB, where Jack Hedin of Featherstone Farm (the southeast Minnesota farm that inspired my first cookbook) and I spoke to an enthusiastic crowd. I was also able to reconnect with Will Allen, the nation’s original pioneer urban farmer, founder of Growing Power, and writer of BFTB’s foreword, when he spoke at a food ethics conference in La Crosse, Wisconsin. 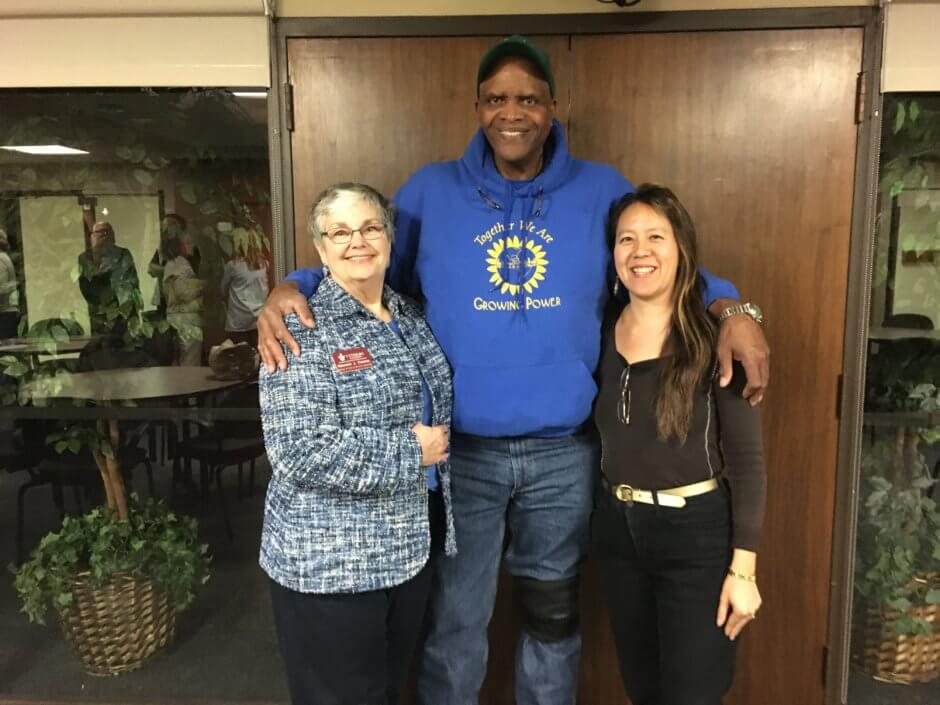 In June I drove out to the East Coast for my first real tour with BFTB. This was a part of the country I had never been to before but always dreamt of seeing. I visited Common Good City Farm in Washington DC (read more here) and toured gorgeous Lancaster in Pennsylvania with foodie and BFTB social media friend Paul Anater (more here), followed by a very rainy outdoor early summer book signing at Manhattan’s famous Greenmarket in Union Square. 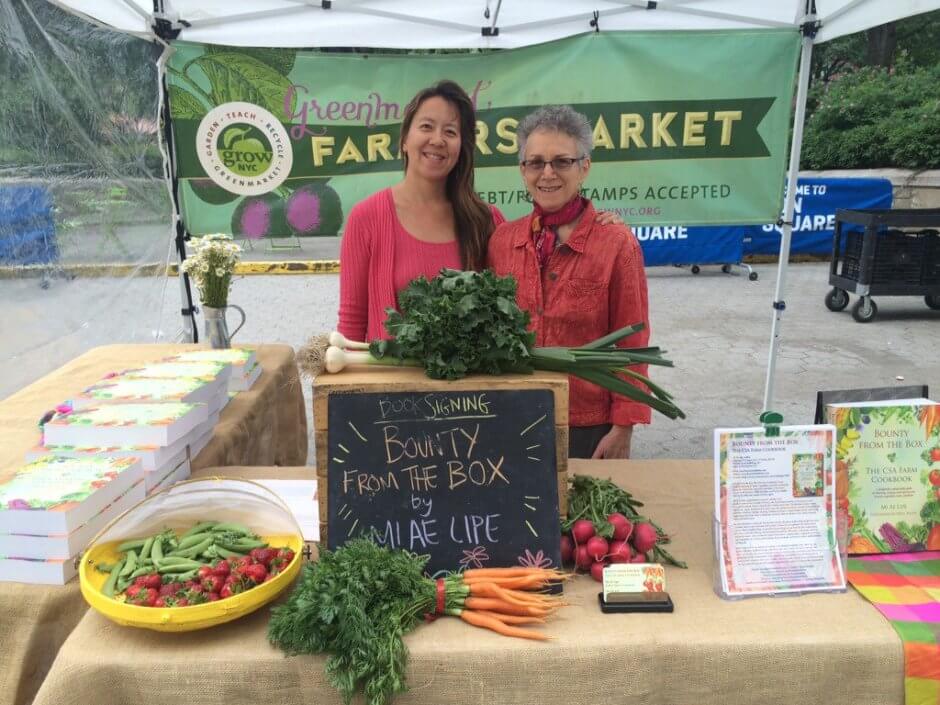 I had a fantastic time speaking and signing at two places in farm-carpeted Long Island—Sang Lee Farms (one of the featured farms in the book) and Bayard Cutting Arboretum. There was also time to indulge in a few NYC culinary delights, including a trip to Mario Batali‘s famed Eataly emporium. His passion for the good things of the earth—and the people who grow them—is palpable. 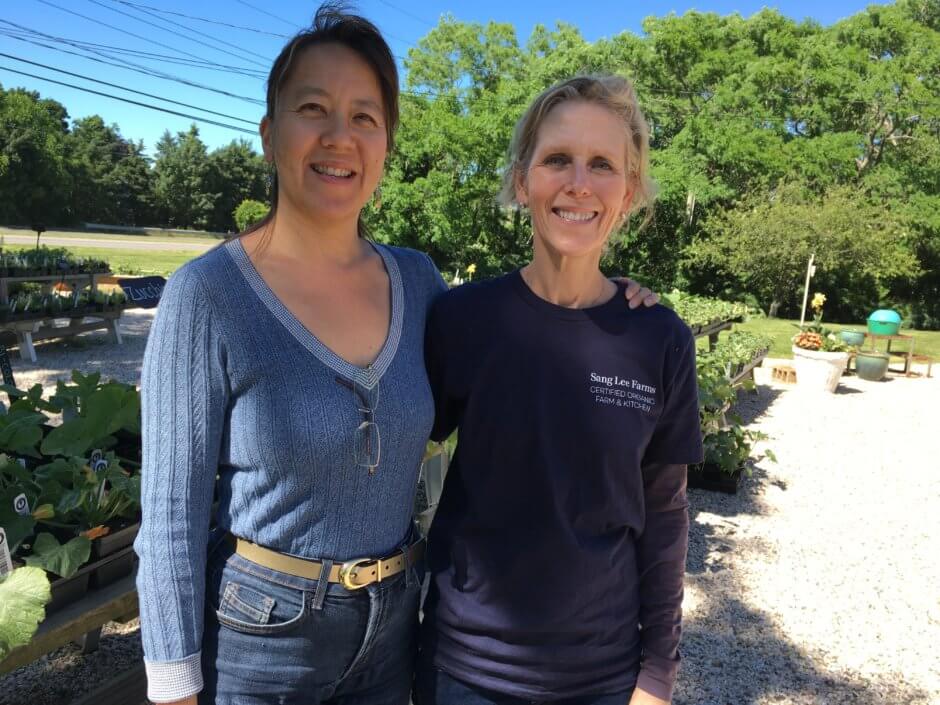 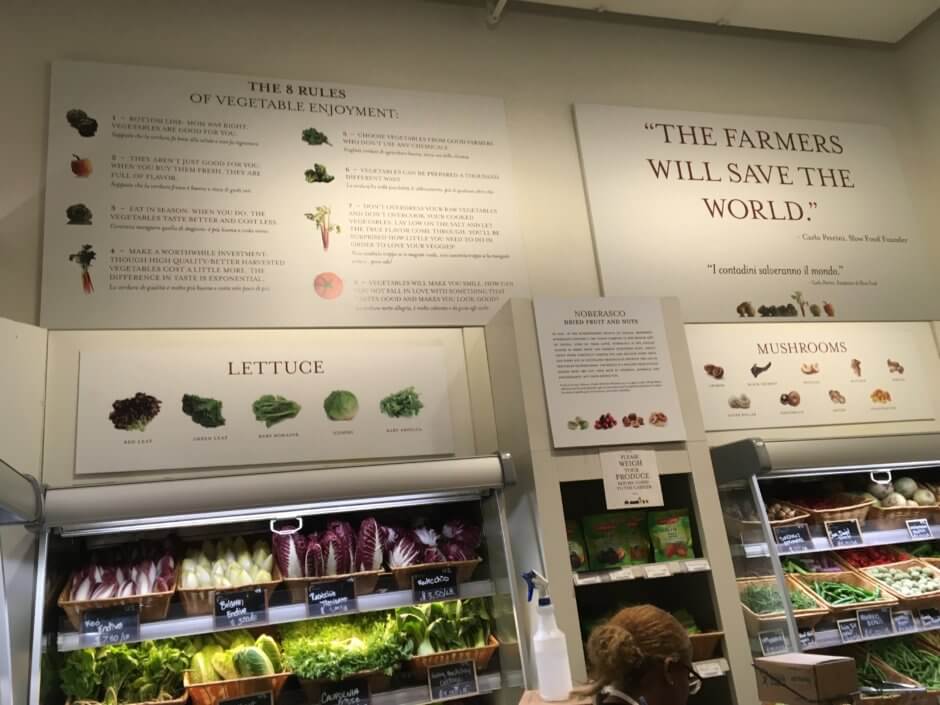 In the produce section of Eataly in Manhattan.

From the frenetic pace of NYC, it was on to the scenic, small-town beauty of Brattleboro, Vermont, where I spoke at the home of locavore organization Strolling of the Heifers. Afterward I headed to far northeastern Maine, where BFTB proofreader Laurel Robinson resides. She and I hung out at the Machias Farmers Market for a 5-hour book signing, where I swear I must have met at least half of this most friendly town, followed by a talk at the gorgeous Machias Library. And of course, more eating was involved, sampling Maine’s finest local foods—fiddleheads, lobster, and seaweed. 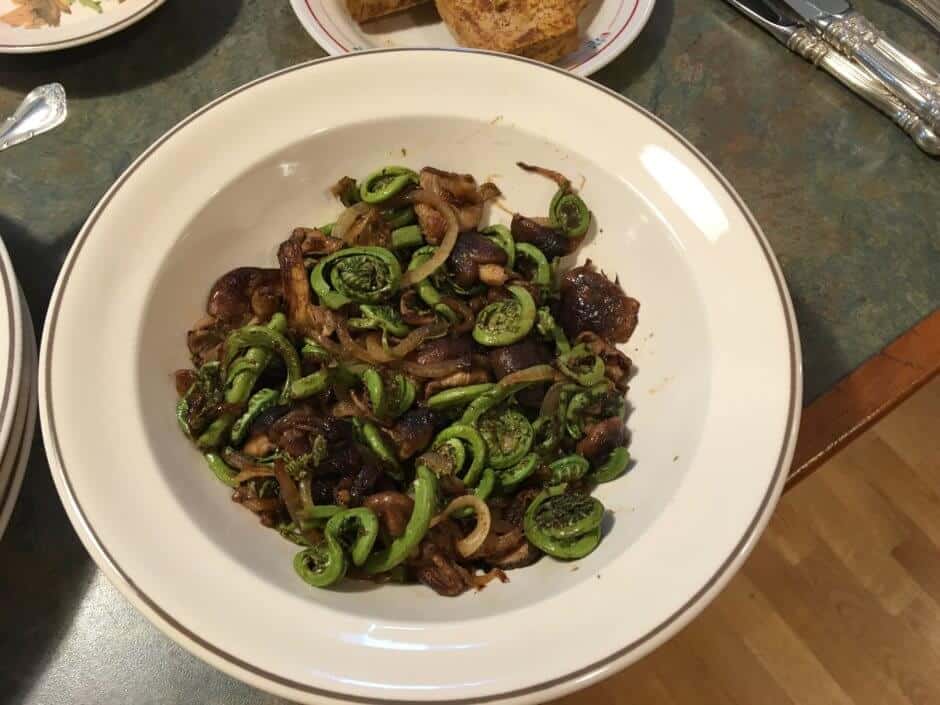 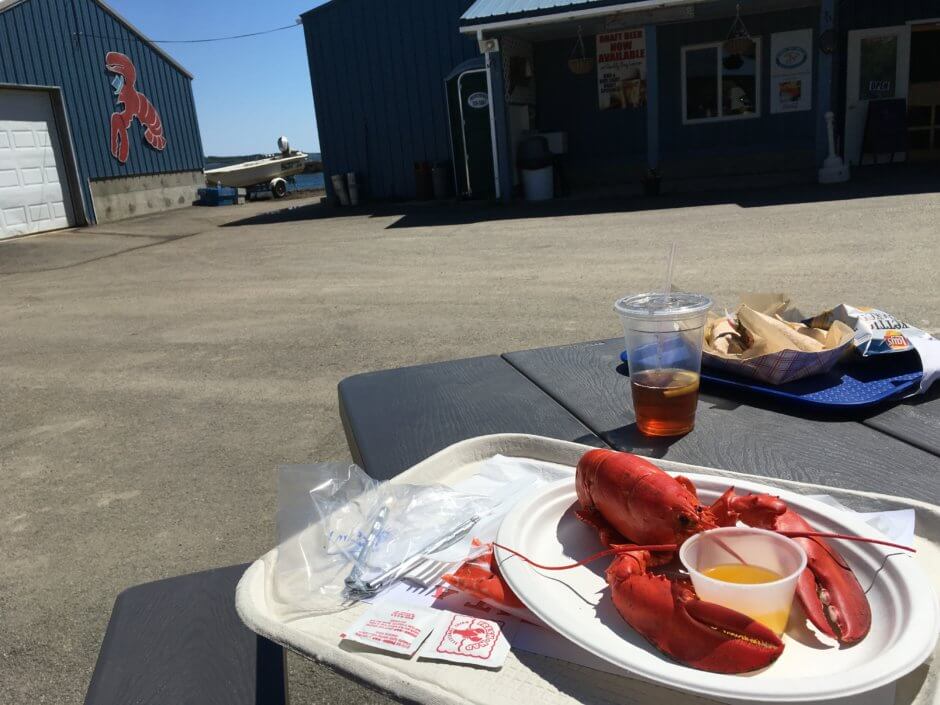 Maine lobster, fresh at its source. 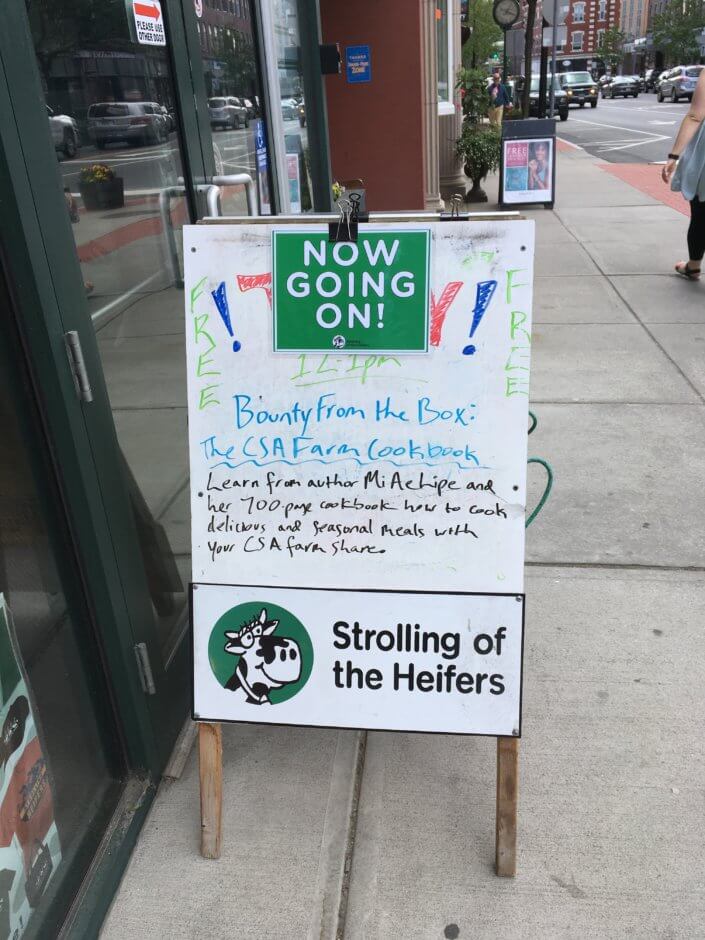 Signboard at Strolling of the Heifers, Brattleboro, Vermont, June 13, 2016.

In July it was off to the San Francisco Bay Area, where I was warmly welcomed by a lovely and engaged audience at the thoroughly charming Omnivore Books, San Francisco’s only cookbook store. Later I spoke at an assisted-living home in Antioch, made an appearance at the Brentwood Farmers Market, and, by speaking about the role of women in farming, helped kick off a woman’s meetup group at the home of Alli Cecchini, owner of First Generation Farmers in Brentwood.

August saw several Midwest appearances, including at the Mississippi Market Co-op in St. Paul, Minnesota; Menomonie Market Food Co-op in Wisconsin; and the legendary Mill City Farmers Market in Minneapolis (which has a special place in my heart because it was where I did my very first book signing appearance with my first cookbook nearly nine years ago). Along the way I connected with the great folks at HAFA (Hmong American Farmers Association) at the Birchwood Cafe and rekindled relations with the Minnesota Landscape Arboretum‘s fantastic gift store (they’ve been selling BFTB at a steady clip all year).

Along the way, BFTB had the good fortune to be reviewed in a number of Edible Communities magazines, which report on local food scenes in the towns and cities where they are published. BFTB was reviewed or mentioned by Edible Brooklyn, San Antonio, Ohio Valley, South Florida, Aspen, East End (NY), Phoenix, East Bay (CA), San Francisco, and finally by Edible Communities itself.

Thanks to the fantastic networking efforts of the editor of Edible South Florida, I received a prestigious invitation in August to present at the Miami Book Fair, the largest literary fair in the US. And so we were on for a book tour in Florida in November! Unlike the other cities I visited this year, Florida lags far behind in local food and eating, a true paradox in spite of its agriculturally lush climate. But thanks to the Saturday Morning Market in St. Petersburg, Eva Worden of Worden Farm in Punta Gorda, the SW Community Farmers Market in South Miami, the Yellow Green Farmers Market in Hollywood, Bee Heaven Farm in Redland, Urban Farming Institute in Oakland, Urban Oasis Project‘s Legion Park Farmers Market in Miami, and of course Edible South Florida and the amazing folks at the Miami Book Fair (including their publicist extraordinaire, Lisa Palley, who helped get me appearances on Miami radio and TV), my Florida tour blossomed in a way I simply never could have imagined. 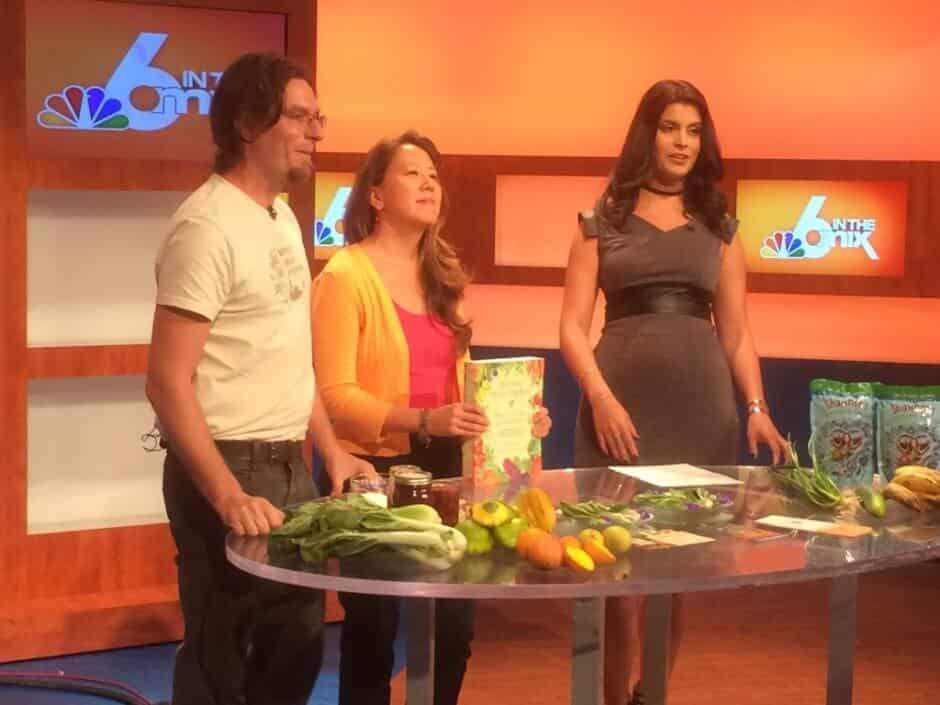 On the Six in the Mix show on NBC’s Miami station with host Roxanne Vargas and Art Friedrich of the Urban Oasis Project, November 15, 2016.

Topping it off was the opportunity to appear on the very first podcast of Edible South Florida—you can listen to it here.

Selling books as a self-published author can be hard, especially when you’re first starting out and the wolves of debt are howling outside the door as you struggle to feed the gaping maw of your business startup. The energy and vibe of every signing, appearance, or talk is different, depending on the setting, the host, who shows up, the weather, publicity, chance, and the feng shui of the moment. There are days when you can spend five hours sitting at a table at a farmers market or booth and only sell two books, or get the runaround yet again by a retailer who just can’t pin down their decision-making manager to carry the book or not. 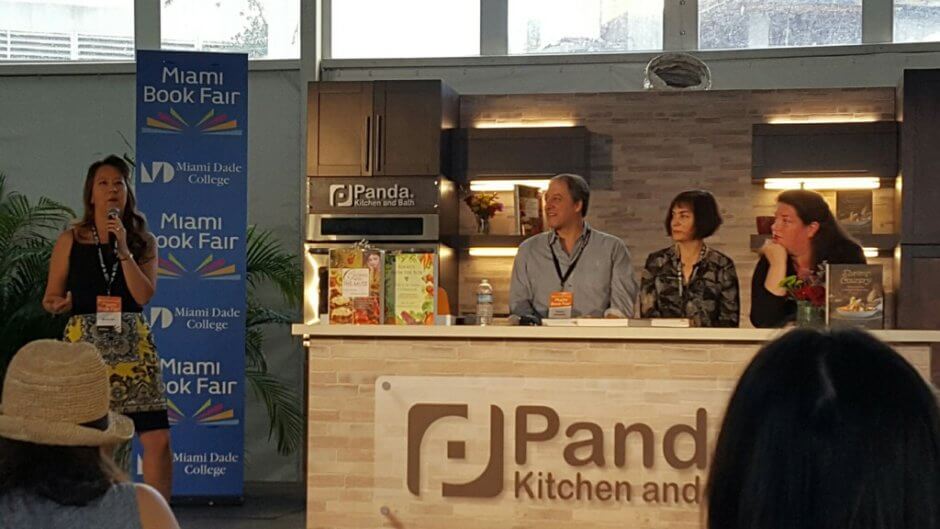 But for every one of those discouraging times, there is the surprise order of a dozen books by a food co-op you had just about given up on, or someone who tells me how excited they are to start cooking with my book or give it to their family or friends, their eyes twinkling with excitement. Many times people tell me stories of how they started subscribing to a CSA, cooking more as a result, or volunteering for their local farm or food bank. Sometimes they’ve even started a website or nonprofit devoted to making our food systems better. I see the hope, huge smiles, and deeply etched passion in their eyes and demeanors—such is the power of food to weave nourishment into the soul and community as well as the body. And it is those moments that tell me without a doubt that this crazy adventure has all been worth it. 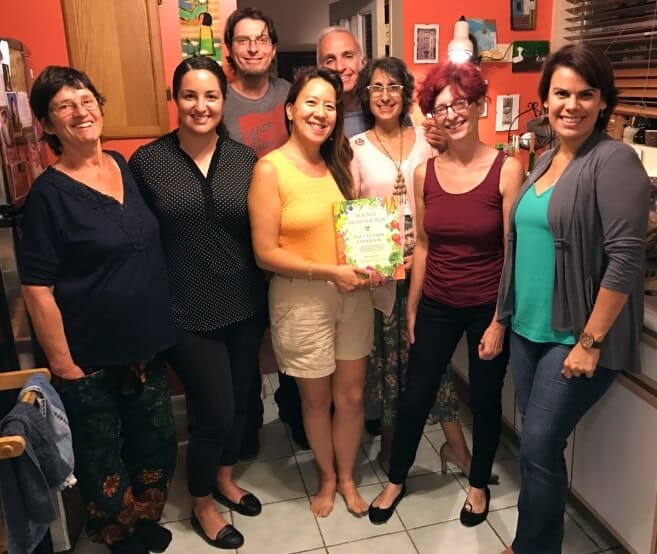 What does 2017 hold? More of the same!! I’ll keep working to spread the word about BFTB and get it available through more farms, retail outlets, and organizations. I hope to go on a single large tour this coming summer, covering the East Coast, the South, Southwest, and possibly southern California. And we need your help too! If you’d like Bounty from the Box to be available in your community, please tell your local food co-op, CSA farm, gift or kitchen store, nursery/greenhouse, bookseller, or community food organization about it and to contact me at miae@bountyfromthebox.com or check out our website at www.BountyfromtheBox.com. And in the spirit of helping those who can’t afford to buy the book, tell your local library that they should carry it too, for their community!

Again, to all the farms, retailers, markets, review writers, publicists, customers, and social media friends who have championed BFTB the past year and a half and opened their doors, stores, farms, fields, and markets to us, my team and I can’t thank you enough for your support—we couldn’t have done it without you. And here’s to 2017—we look forward to expanding our family all over the country in supporting better food for all in the New Year!

Top photo: Mi Ae at the Saturday Morning Market in Saint Petersburg, Florida, with Tim Nicholson of The Menu Spring and students from the Pinellas Technical College Culinary Arts Program who participated in the Market’s Tasting Cart demo on November 5, 2016. Under Tim’s skilled guidance, they prepared Sauteed Radishes with Sugar Snap Peas and Dill, a recipe from the Bounty from the Box cookbook, and passed out samples to hungry market shoppers.