Victory gardens? Does anyone remember them or know what they are? An updated version of the Victory Garden, television’s longest-running gardening show, is still airing on PBS these days, but the origin of the term dates back to the First World War. Victory Gardens, also called War Gardens, first appeared in America during World War […] 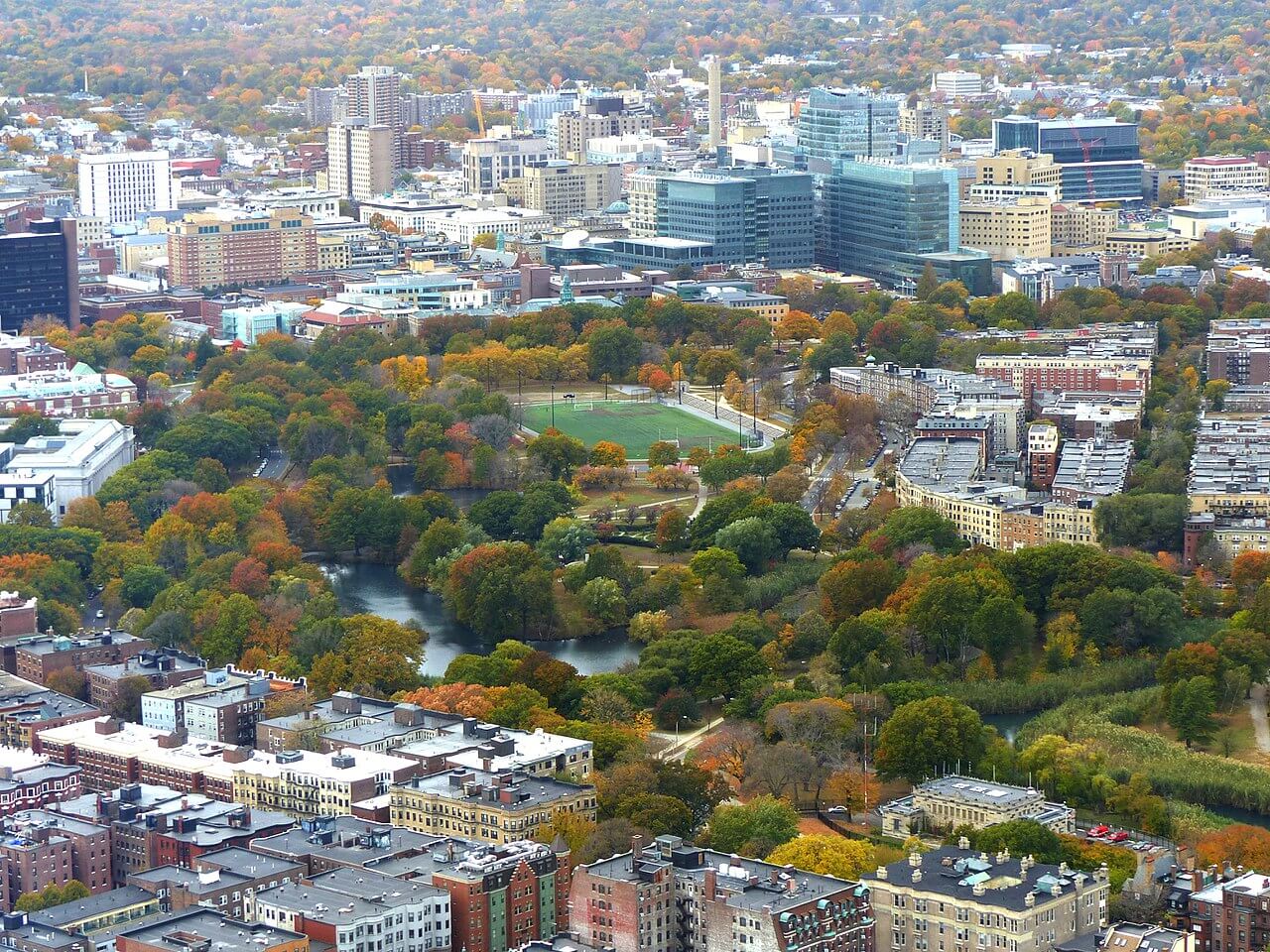 Victory gardens? Does anyone remember them or know what they are? An updated version of the Victory Garden, television’s longest-running gardening show, is still airing on PBS these days, but the origin of the term dates back to the First World War.

Victory Gardens, also called War Gardens, first appeared in America during World War I. Severe food crises in Europe led the U.S. government, just before entering the war, to establish the National War Garden Commission to encourage Americans to plant gardens so that more of the food that farmers produced could feed U.S. troops and allies rather than be used for stateside consumption.

People were urged to plant on all land that was not already in agricultural production—including school and company grounds, parks, backyards, and vacant lots. Civic organizations joined the effort. A School Garden Army mobilized children to enlist as “soldiers of the soil.”

These combined efforts resulted in more than 8 million garden plots being planted in 1917 and 1918. By the end of the war, interest in the home garden campaign dropped off, but shortly after the U.S. entered World War II, victory gardens began to reappear. Eighteen million of them were in existence by May 1943, and combined they produced 30 to 40 percent of all vegetables eaten stateside. Now, just two are believed to remain from the WWII era—in Boston and Minneapolis.

Oldest Victory Gardens in the U.S.

In Boston, the Fenway Victory Gardens are the oldest continuously operating food gardens that remain from World War II. They were established in 1942 by the Roosevelt Administration and the City of Boston and located in the famed Emerald Necklace of city parks designed by renowned landscape architect Frederick Law Olmsted. 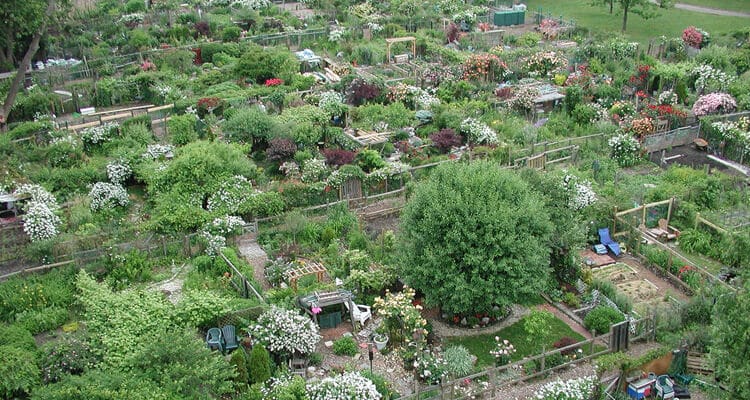 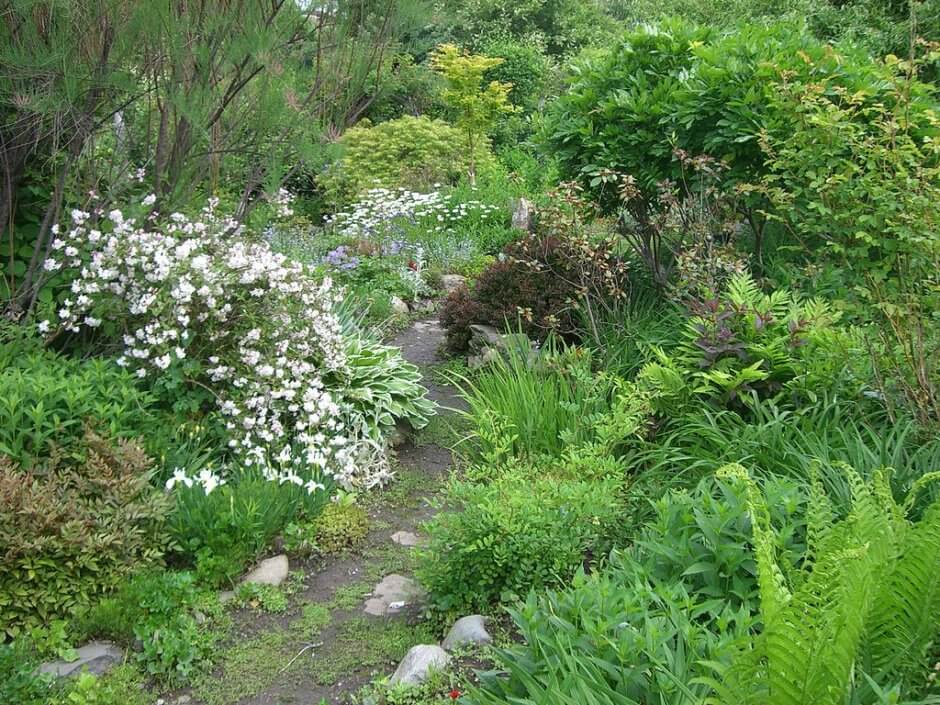 I recently spent a sunny September afternoon visiting the Fenway Victory Gardens with a Boston friend. We meandered here and there, following walkways among the 500 garden plots spread over 7.5 very green acres in a dense urban neighborhood of apartments, colleges, hotels, and a major league baseball park. Signs identified specialized plots such as a medicinal herb garden, an apiary, a teaching garden, and a special-needs garden (that is, ADA-accessible), but most of what my friend and I learned came from striking up conversations with gardeners who seemed happy to take a break from their tasks of the day. 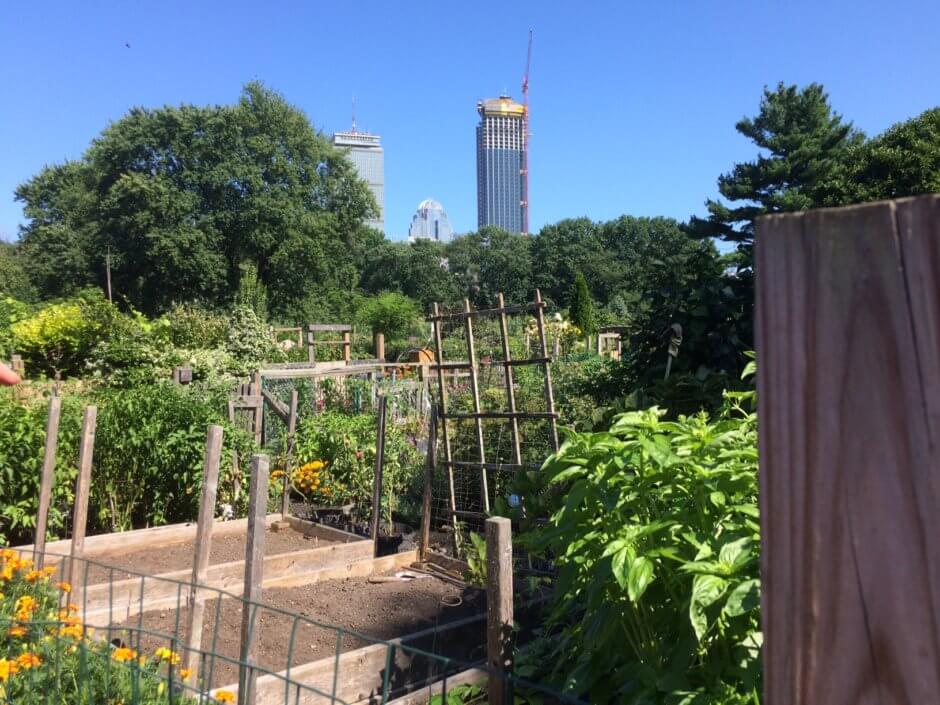 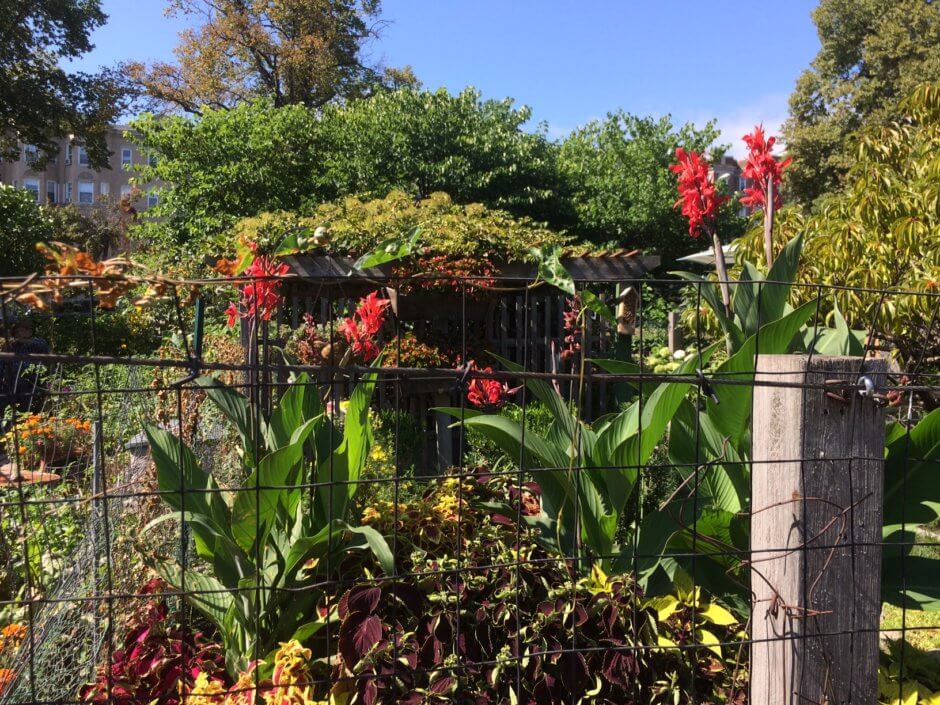 More than 375 gardeners of all generations tend the plots, which average 15 by 25 feet. Some of them share plots from which they’ve removed the fences. All are members of the Fenway Garden Society, established in 1944 by people who wanted to continue urban gardening as the war was drawing to a close. Richard D. Parker, for whom the gardens are now named, was a member of that early group and remained an influential leader in the society until his death. Two of the oldest members today have had plots for 50 years, and one of them, Arthur Rose, was recently awarded an Honorable Mention for his garden in the Mayor’s Garden Contest in the Seniors category. 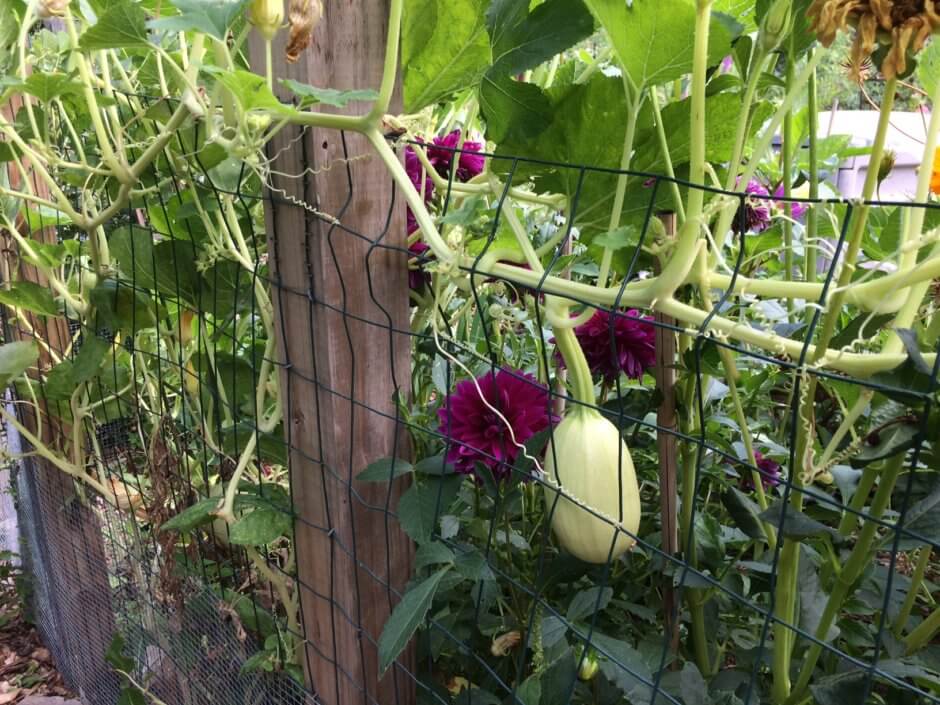 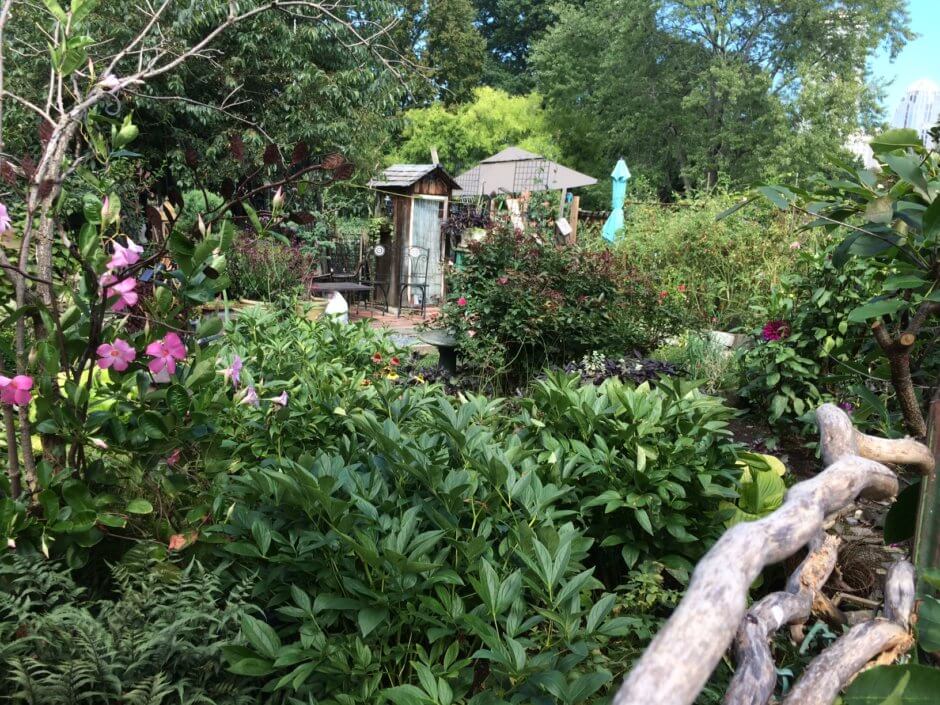 (Four photos above by Martha Wagner)

As you would expect, lots of vegetables, herbs, and ornamentals are being grown in these gardens, but what surprised me was the varied use of space in each plot—for sheds, gazebos, garden statuary, trees, and typically a sitting area of some kind. What’s allowed and not allowed is spelled out in detailed guidelines approved by the Boston Parks and Recreation Department.

Growing Food for Butterflies as Well as People

My friend and I were very, very lucky to encounter gardener Elizabeth Bertolozzi during our visit. Elizabeth happens to be the current president of the garden society and has a particular passion for supporting monarch butterflies through growing several kinds of milkweed. Monarch caterpillars only eat milkweed and monarch butterflies need the plant for laying their eggs. Elizabeth shares some of her seeds and seedlings with several of her garden neighbors, along with her expertise about how to properly grow the plant. 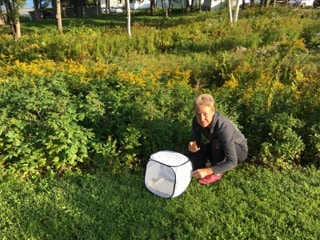 Here’s Elizabeth Bertolozzi, president of the Fenway Garden Society, about to release five newly emerged monarch butterflies while on a trip to Mt. Desert Island, Maine, in early September 2017. She is surrounded by a field of goldenrod, a favorite late summer nectar source. (Elizabeth Bertolozzi) 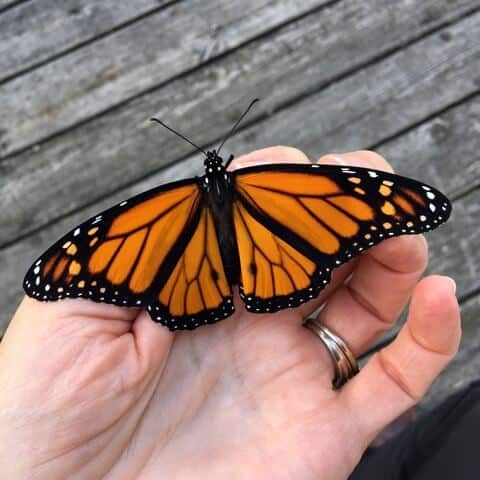 Season by season, year by year, the Fenway Victory Gardens green-thumbs share stories and tips and join together for community work days and celebrations such as FensFest, the annual September anniversary party and harvest celebration. These photos below are from FensFest held on September 9, 2018, which also celebrated the 75th anniversary of the Gardens. 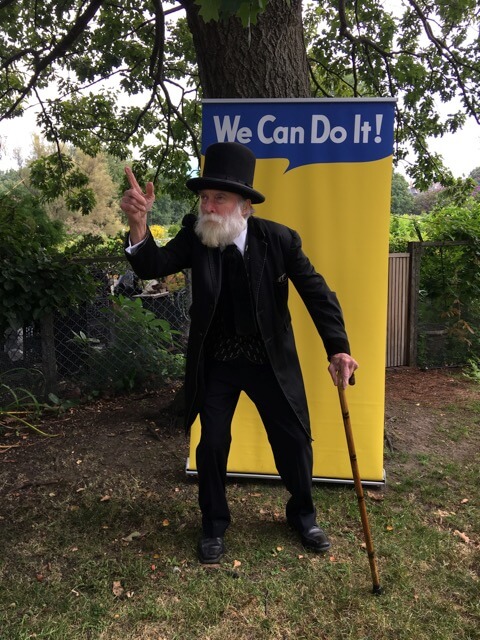 A Frederick Law Olmsted impersonator declaring “We Can Do It!” in front of a Rosie the Riveter backdrop at the 2018 FensFest, which celebrated the 75th anniversary of the Gardens. The legendary landscape architect originally designed the Gardens in 1942. (Fenway Garden Society)

Is there a historic community garden or botanic garden near where you live that you’ve been meaning to visit? Let us know! One of our favorites is in downtown Seattle. The Danny Woo International District Community Garden, built in 1975, has almost 100 small garden plots tended by elderly, low-income, primarily non-English speaking gardeners. The 1.5-acre garden is also home to a children’s garden, chicken coop, and fruit tree orchard.

About the author: Martha Wagner is a Corvallis, Oregon-based food and health writer, gardener, and passionate advocate for sustainable living, wellness, and organic agriculture.