A Coming of Spring: Rhubarb

You know that spring has sprung when you start seeing the huge crimson or rose-blush stalks of rhubarb laid out on the farmers market table, or perhaps vigorously growing in your own garden beneath enormous leaves. In the Western Hemisphere, rhubarb typically comes into season during April and May, making it one of the first fresh […] 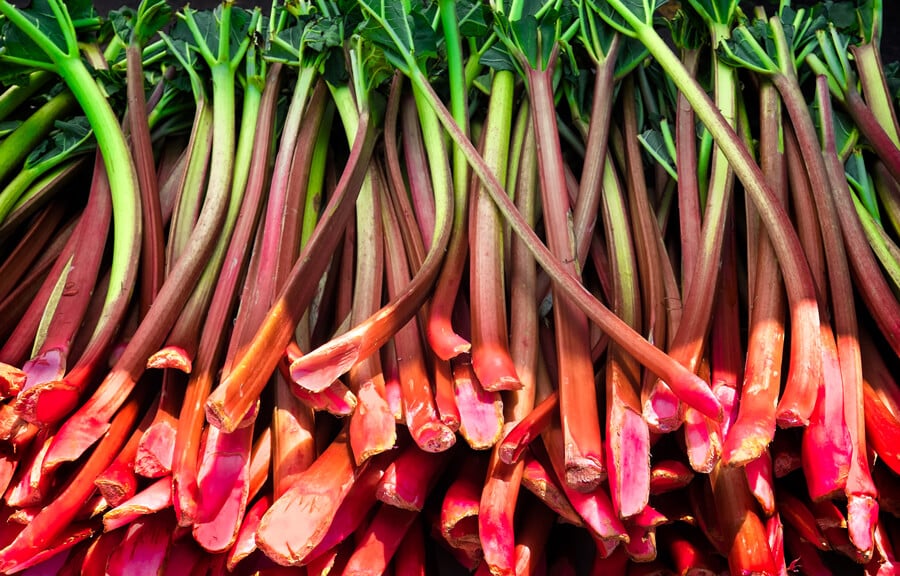 You know that spring has sprung when you start seeing the huge crimson or rose-blush stalks of rhubarb laid out on the farmers market table, or perhaps vigorously growing in your own garden beneath enormous leaves. In the Western Hemisphere, rhubarb typically comes into season during April and May, making it one of the first fresh food plants to mature. For this reason, it was much welcomed in times before produce was available year-round.

Rhubarb is a curious phenomenon, for it is one of the few plants of which we consume just the thick stalks, or petioles. Its assertive tartness is caused by large quantities of oxalic acid, which makes the leaves unpalatable and toxic (and the same chemical that makes spinach slightly acid and salty). But the plant’s succulent, juicy stems are delicious, especially when sweetened with plenty of sugar, strawberries, or other fruits in pies, sauces, and jams.

Rhubarb is native to Asia, where the dried root has been used in traditional Chinese medicine for thousands of years. It was so revered for its healing qualities that rhubarb cost ten times as much as cinnamon in France during the mid-1500s. Although rhubarb was consumed as a food in the ancient Middle East, it did not exactly take the European or American gastronomic scene by storm. It remains a specialty food whose popularity waxes and wanes, depending on the public’s attitude toward the vast amount of sweetener necessary to make it palatable.

Selection: Fresh rhubarb stalks should be firm, crisp, and brightly colored, with no signs of wilting and shriveling. Slender stalks are more tender than thicker ones.

Storage: Wrap unwashed rhubarb stalks in a plastic bag and refrigerate in the vegetable crisper, where it will keep for up to 10 days.

Trimming and Cleaning: Thoroughly wash the stalks under running water to remove all traces of dirt, and trim off the stem ends and discard. Although the skins on rhubarb look quite substantial, they soften with cooking and are quite edible; peeling rhubarb is not common. 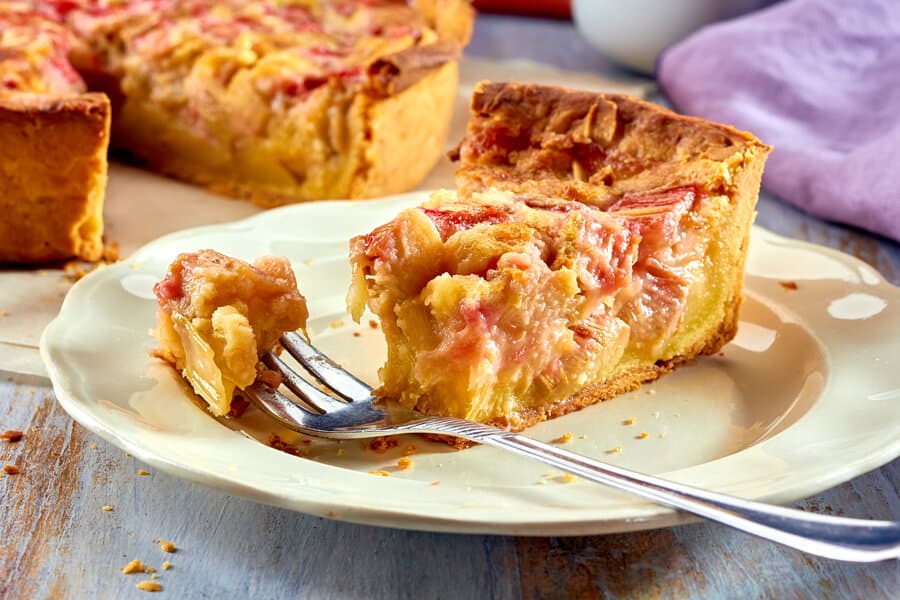 Cooking Tip: The acidity of rhubarb reacts with aluminum, iron, and copper cookware, leading to discolored pans and possible leaching of the metals into the food. Use only anodized aluminum, stainless steel, or glass pans for cooking and baking rhubarb concoctions. Also, if you prefer to not use large quantities of sugar in rhubarb recipes, try preparing it with sweet fruits (strawberries, raspberries, or apples), apple juice concentrate, or small amounts of honey or stevia.

Fun Fact: Botanically and gastronomically, rhubarb is properly considered a vegetable, although it is often used like a fruit in recipes. However, in 1947, the US Customs court in Buffalo, New York, declared it a fruit, which allowed it to pass with a smaller import duty.

For a delicious, very easy-to-make rhubarb pie, check out this recipe by my friend, Rich Hoyle. If you don’t feel like baking, you can make Rhubarb Compote instead, made lively by the addition of ginger and balsamic vinegar.