This is one of nearly a hundred essays from my cookbook, Bounty from the Box, that shed light on the many issues in our food landscape. — Mi Ae _______________ It’s a cold, hard fact that much of America’s agricultural prosperity and food systems are built—literally—on the backs of immigrant workers. Some are legal, and […] 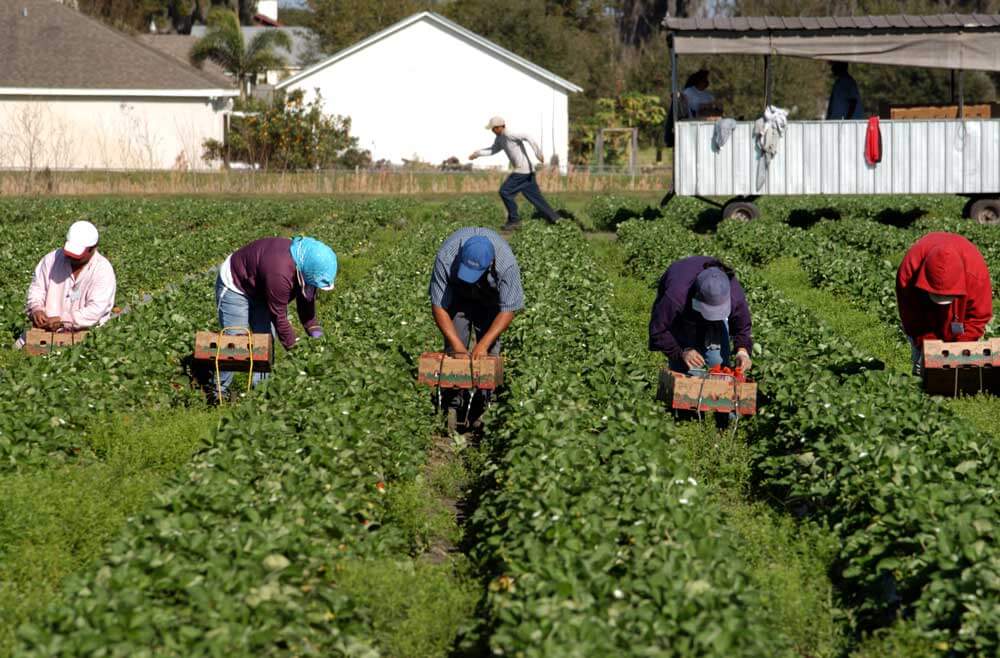 This is one of nearly a hundred essays from my cookbook, Bounty from the Box, that shed light on the many issues in our food landscape. — Mi Ae

It’s a cold, hard fact that much of America’s agricultural prosperity and food systems are built—literally—on the backs of immigrant workers. Some are legal, and some are undocumented. And however you feel about the matter, the truth is that without them, we simply could not eat the way we do.

Farmworker immigration is nothing new; as long as farms have existed in America, people have either been brought in or have immigrated from other countries. Every year, between 1 and 3 million immigrant farmworkers leave their home countries to labor in America’s fields, picking everything from cherries to tomatoes. More than 70 percent of all hired US farmworkers today are foreign-born (mostly from Mexico), and more than half of those are undocumented, meaning that they have entered the United States illegally without official paperwork and guest visas.

A perception persists among some that such immigrants come to America to take advantage of its welfare systems and that they are depriving local Americans of jobs. But studies have shown repeatedly that the opposite is true. In fact, migrant farmworkers as a whole are much less likely to use social service systems (perhaps partly out of fear of being deported), and they contribute far more to the economies of the communities in which they work than they receive. They also do the work that very few Americans want to do—who would willingly spend 12 or 15 hours a day bent over or squatting, picking strawberries as fast as possible or harvesting potatoes in the hot sun or pouring rain for less than minimum wage?

Most of us have absolutely no inkling of the profound suffering endured by this largely invisible population. Contrary to what some may believe, these people do not come to America simply to glean money. Depending on their home country, their villages and cities are often rife with crime, political persecution, violence, scarce employment opportunities, economic instability, and extreme poverty on a scale unimaginable to most of us. Coming to the United States to work is one way of escaping a life that really has no viable future for themselves or their children (or even literally staying alive, for that matter). In a twist of deep irony, some of these workers have farms in their own home countries and are already skilled in agriculture, but unfair trade agreements between the United States and Mexico prevent them from earning enough money from their own farming to make a decent living. 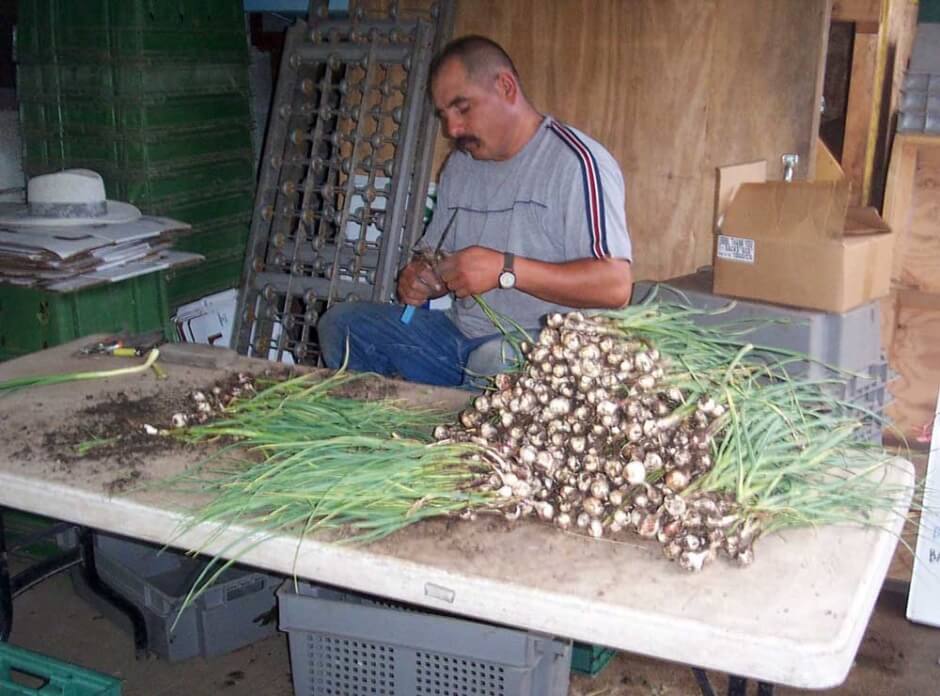 Esteban Gasca at Featherstone Farm (Rushford, Minnesota) trims and cleans garlic to prepare it for curing.

Although legal workers are able to safely enter America, their undocumented counterparts risk their lives and life savings to cross the border. Swimming across rivers and trekking deserts, hundreds die every year from heatstroke, dehydration, and direct violence at the hands of predatory Mexican and American assailants in the borderlands. Once they have survived the border crossing and managed to not be deported, they often face discrimination at every conceivable level. Depending on the labor hierarchy and management policies of the farms on which they work, they may be abused physically; forced to work without breaks; live in substandard housing with no heating, air conditioning, or barely any running water; and denied medical care or other basic health services. They often cannot advocate for better working or safety conditions, as their employers can play the “deportation card” and threaten to report them to the authorities. They are frequently marginalized and even criminalized in their communities, members of which deliberately (or unwittingly) take advantage of these workers’ uncertain legal status to perpetrate systematic human trafficking and subjugation.

As you might imagine, their physical and mental suffering can be profound. They experience severe repetitive-motion issues, joint and muscle problems, and the effects of repeated exposure to toxic pesticides. They are often separated from their families for years at a time, live under the constant psychological threat of potentially being deported (or reported), and endure the rigors and instability of life on the move as seasonal work takes them to different places.

All of this on top of the fact that they are among the very lowest-paid workers in America, below that of even restaurant dishwashers. The average immigrant farmworker makes just $11,000 a year. 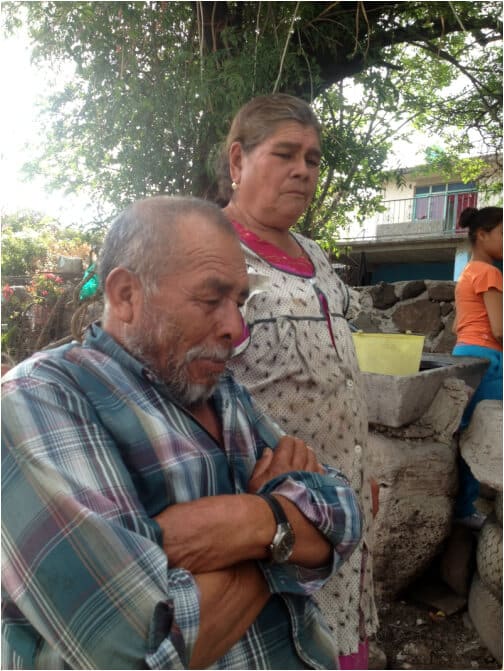 The matriarch and patriarch (Salvador Sr.) of the Gasca family, in their village of Vista Hermosa, Mexico. All five of their sons, as well as numerous nieces, nephews, grandchildren, and even Salvador Sr. himself, work seasonally up north for Featherstone Farm in Minnesota—some for nearly two decades now. In fact, Featherstone is a three-generation employer! The Gascas work part of the year in Minnesota under the H2-A guest worker visa program and send money home to help support their own farms and families in Mexico.

We may think that immigrant farmworkers are a fixture just on large-scale, monoculture agricultural operations, such as those in California’s Central Valley, but in fact they work everywhere, including on a number of the CSA farms listed in Bounty from the Box. Regardless of the size and type of farm, the need for and importance of these workers is undeniable. Machines simply cannot accomplish many field tasks, especially with delicate crops; an enormous amount of hand labor is required. Without millions of these workers to cultivate and harvest every year, American agriculture and our current food systems—right down to our grocery stores, restaurants, farmers markets, and our own dinner tables—simply couldn’t exist.

Both these workers and their employers would like nothing better than for immigrants to have an easier means of obtaining legal status. However, as of 2015, American immigration policy makes it extremely difficult for immigrants to be legal, unless they have high levels of education, money, white-collar employment prospects, or provable evidence of persecution in their home countries. Even if an immigrant worker has family members who are legal citizens or hold permanent US residency, it is very difficult to get legal status.

There is the federal agricultural guest worker H-2A program, but to participate, both farms and workers must comply with—and prove—a long list of conditions. Red tape and bureaucratic delays are common. In the fields, nature and its harvests wait for no one, and many farms simply cannot afford such delay. It results in a horrible situation for both; farmers often want their workforce to be entirely legal and take steps to “do the right thing,” but the current system often does not allow for timely execution of this process. And just because workers are legal under the H-2A program does not mean that they are protected by workplace laws and not abused. In fact, the opposite is true, and even over the course of its three decades, the program’s protections continue to be so modest as to be essentially ineffectual.

Current American immigration policy means that farms cannot rely on a stable workforce from year to year. Workers live in constant fear of getting caught and deported, and as employers, farms risk breaking the law and incurring huge penalties. Farms frequently cannot find legal alternatives (i.e., drawing from a legal worker pool). Even a couple of missing workers during crucial picking times can mean lost revenue and increased labor for others on many levels. This system works for no one, and it enables labor and humanitarian injustice to continue on an incomprehensible scale.

An immigrant worker was very likely to be the last human to physically touch your blueberry or cherry tomato. Nearly every fruit and vegetable on your plate involved such a worker in some part of the process. It’s high time we honor and advocate for these invisible workers in truly respectful, meaningful ways, both big and small.

What are your thoughts? Are you a farmer who hires seasonal or permanent immigrant workers? Are you a farm worker yourself or know of someone who is? Would love to hear your perspective—feel free to comment below.