Attend a CSA Share Fair: Shop for a Farm That Fits Your Needs

Put 40-plus farmers in a cavernous old industrial building along with displays of their farm goods—from honey and salami to fresh produce—then add a few chickens and piglets, local chefs doing cooking demos, and a cookbook swap, and what do you get? The second annual CSA Share Fair, sponsored by the Portland Area CSA Coalition in Oregon. […] 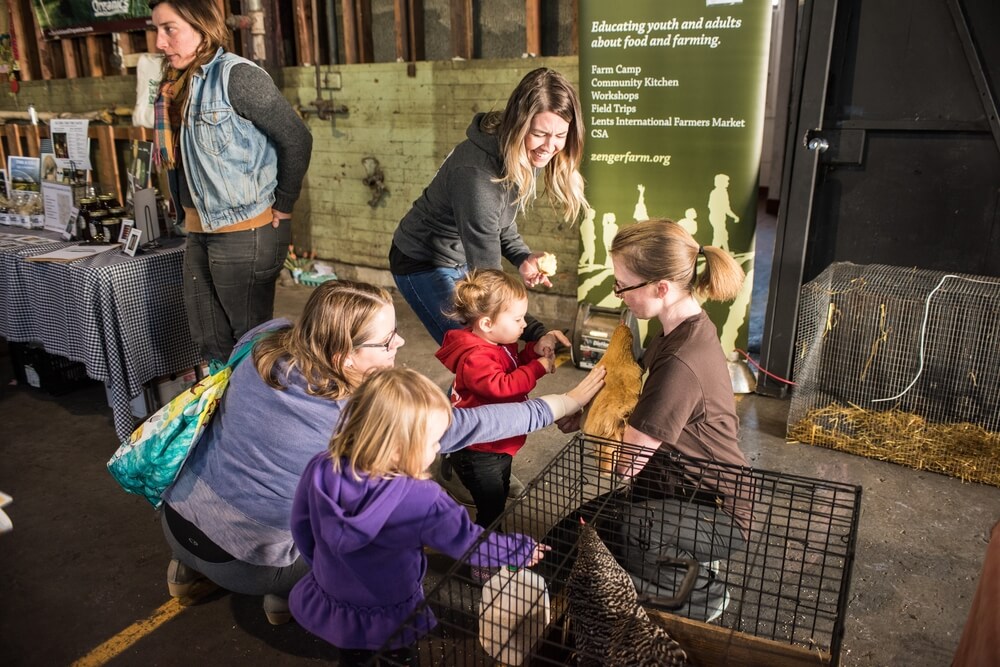 Put 40-plus farmers in a cavernous old industrial building along with displays of their farm goods—from honey and salami to fresh produce—then add a few chickens and piglets, local chefs doing cooking demos, and a cookbook swap, and what do you get? The second annual CSA Share Fair, sponsored by the Portland Area CSA Coalition in Oregon.

Some 1,300 people showed up to meet farmers, look at photos of their farms, and gather information in one fell swoop about CSA shares, delivery locations, length of season, and payment options. A Find Your Farmer guide helped people find farms that matched their needs. Through a new SNAP (formerly known as food stamps) program called Double Up Food Bucks, some of them qualified to receive $200 toward a CSA share. 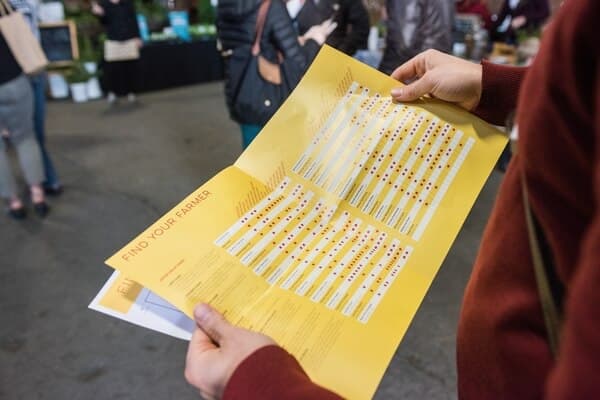 A Find Your Farmer brochure helped helped make sense of all the farms present and where their pickup sites are located. Photo by Shawn Linehan.

Some who came to find a farm may have left with a pile of brochures to study before making a decision, while others signed up for a share at the event. Many took a seat (and Instagram photos) for a cooking demo or two. Kids were engaged with art, games, and a traveling chicken coop. Cookbooks of all kinds changed hands at the cookbook swap.

People come to such events—similar ones take place in other cities, the oldest being in Madison, Wisconsin—with varying needs in mind for joining a CSA. They may want to eat more vegetables, know where their meat or fish is coming from, support local family farms, buy food for canning and preserving, or a combination of reasons.

“We chose to sign up for a CSA this year because we haven’t had time for fruit and veggie gardening since becoming parents, and we want to be inspired to try new recipes and we want to eat more veggies,“ said Theresa. “We chose our CSA because the farmers seem like nice people, they do home delivery, and we liked their variety—interesting perennials, fruits, veggies, herbs, and flowers, plus eggs. We also plan to visit the farm and show Adrian where our food comes from.”

Gillian does most of the cooking and also a lot of canning and preserving; she participates in a canning club that meets monthly. “It’s how I use up produce if there is a lot of one item or more than I can use in a month,” she said. 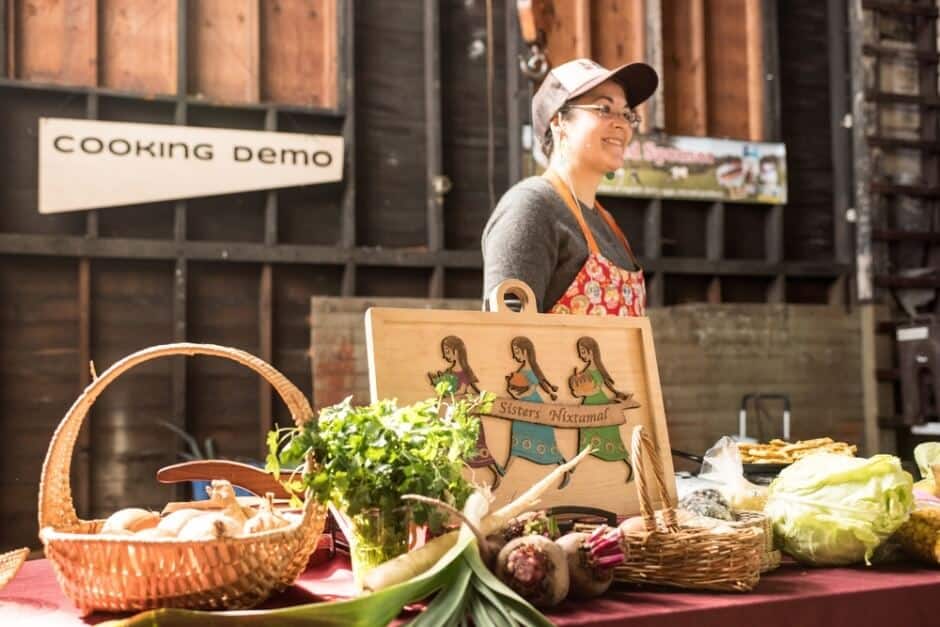 Zak Margolis, who works in computer graphics, attended the share fair, having been tasked by his housemates with finding a new farm because the two farms they previously had shares with stopped doing a CSA. He lives with his sister and a friend, and their mealtimes sometimes include up to seven people, including “partners who tend to float in and out of the house as well our mother who comes to town for a few days about once a month. We’re all decent cooks, and some combination of us eats together once a week or so.”

The son of a food activist, Zak believes that where food comes from, how it’s grown, its impacts on the environment, and farm labor practices all come into play when people buy food, making a CSA share “a great way to vote with your dollars.” 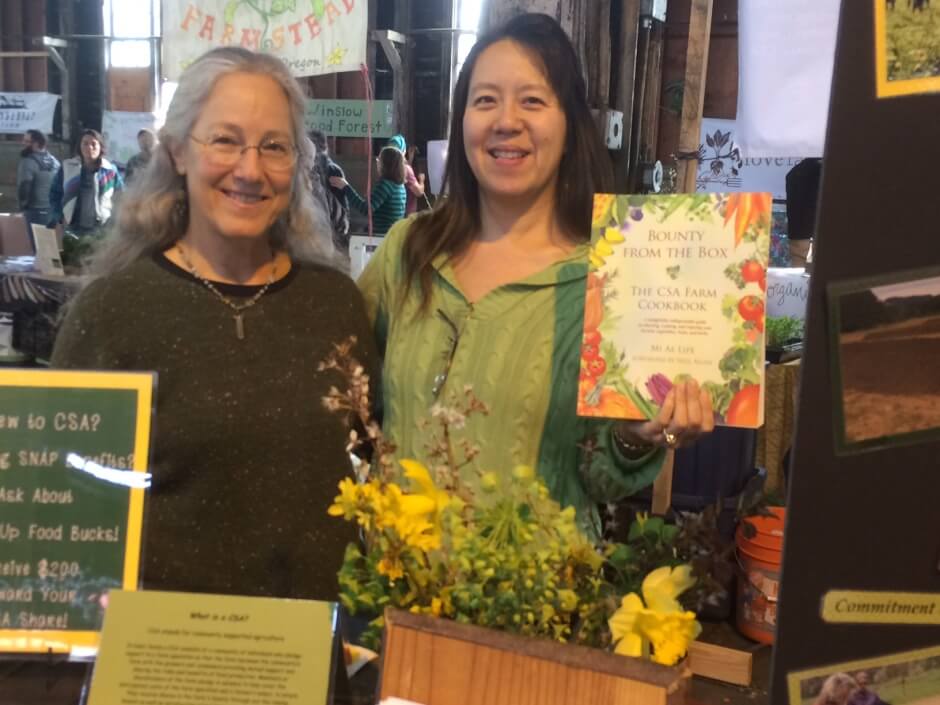 “Also, we love eating,“ he said of his household. “And I’ve become one of those people who starts going nuts if I don’t get regular helpings of green vegetables. A lot of the farms at the fair looked amazing. We wanted to pick a farm that best matched our personal tastes. We like a lot of greens, we like heirlooms, and we love berries and fruit. In the end we picked a farm that we thought had the best pictures.”

Portland’s CSA Share Fair was held last year and this year in an empty ironworks foundry dating back to 1918. The building is part of The Redd on Salmon Street, a two-block site scheduled for restoration in 2017, when it will become a food production and distribution campus.

If you have a chance to attend a share fair near where you live, don’t miss it!

Featured photo at the top of the post by Portland photographer Shawn Linehan.

Also, a huge thank you to Gathering Together Farm, whose staff generously allowed Mi Ae to share a table at the Share Fair to promote her cookbook.