What food lover doesn’t love a good farmers market, indoors or outside, no matter the time of year? In that spirit of anticipation I visited the year-round Santa Fe Farmers Market, now in its 43rd year, while spending a week in Santa Fe in June. Tasting, of course, is a fun part of the market […] 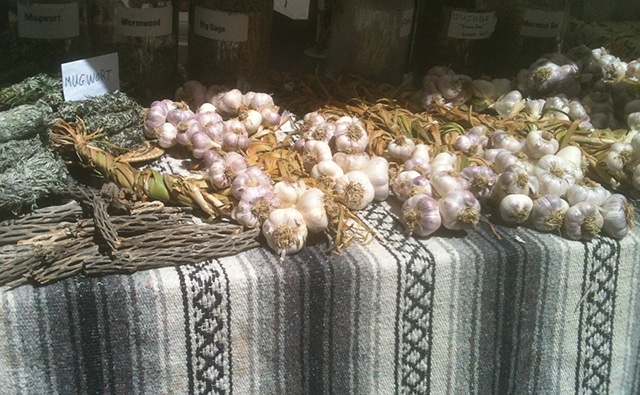 What food lover doesn’t love a good farmers market, indoors or outside, no matter the time of year? In that spirit of anticipation I visited the year-round Santa Fe Farmers Market, now in its 43rd year, while spending a week in Santa Fe in June.

Tasting, of course, is a fun part of the market experience, so I began my exploring with a small cup of atole, a corn-based hot drink that is traditional in Mexico and New Mexico. This one was made from La Mesa Farm’s packaged roasted blue corn ground with organic chocolate, chile, and a little coconut sugar. Delicious! Also delicious were stir-fried pea pods with chile flakes at the stall of chef-turned-farmer Matt Romero—he’s well-known for the chile peppers he brings to market in the fall. And I nearly drooled at the very sight of the handmade Mediterranean flatbreads made by Intergalactic Bread Company—tasting is a must to help choose between cinnamon-pear, pumpkin-piñon nut, apple-elderberry, and green chile and cheese. 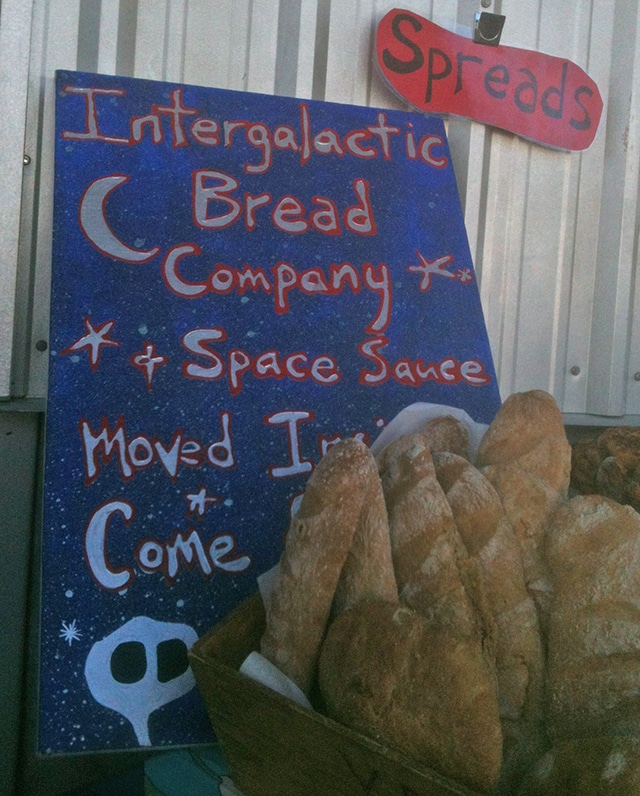 Outdoor market stalls line one side of a six-year-old farmers market building funded through a $4.5 million campaign of the nonprofit Santa Fe Farmers Market Institute. Inside the LEED-gold-certified facility are dozens more vendors, plus a handful of market shops and the Café Pavilion, which serves breakfast, lunch, and coffee. No vendors are selling pizza slices, falafel, or similar casual fare because the market does not allow it. Fortunately, Second Street Brewery at the Railyard and the Flying Star Café are a stone’s throw from the market.

Not all of the more than 120 vendors were offering food samples, but their displays of fresh produce, hominy corn, dried beans, dried medicinal and culinary herbs, and even wriggling red worms were photo-worthy and their stories intriguing. 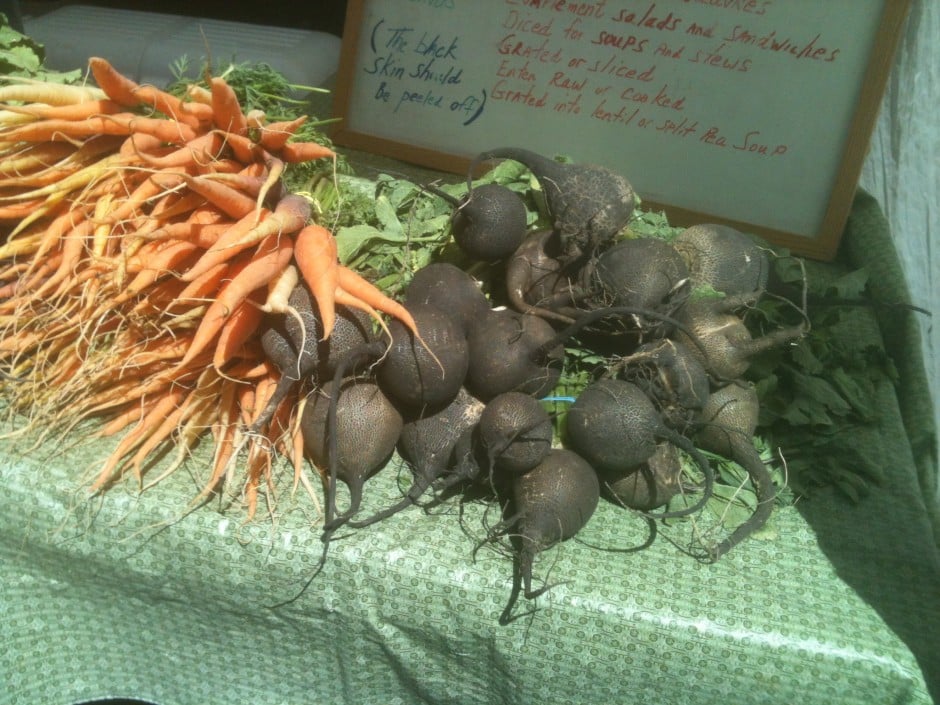 Handwoven scarves, hats, and skeins of wool in many colors drew me into the stall of Coral Clark of Refugio Verde, who raises sheep in the mid-Pecos Valley, about an hour’s drive from Santa Fe. This is her 17th year selling at the market. “I’m one of only a few handspinners left in the country who make a full-time living using fleece from the animals they raise, then dyeing and weaving it to create finished products,” she tells me. “I’ve even sold to Bloomingdale’s and I’ve been able to put three kids through college doing this work.”

Now her livelihood is threatened, Clark says, by a convergence of circumstances, primarily drought and climate change. Without enough water, many farms don’t have grass for grazing animals, and they can’t afford the high cost of feed. With less water, she’s had to reduce her flock to a dozen sheep, and now she has to buy extra fleece as well as silk, alpaca, and mohair to mix into some of her finished goods. 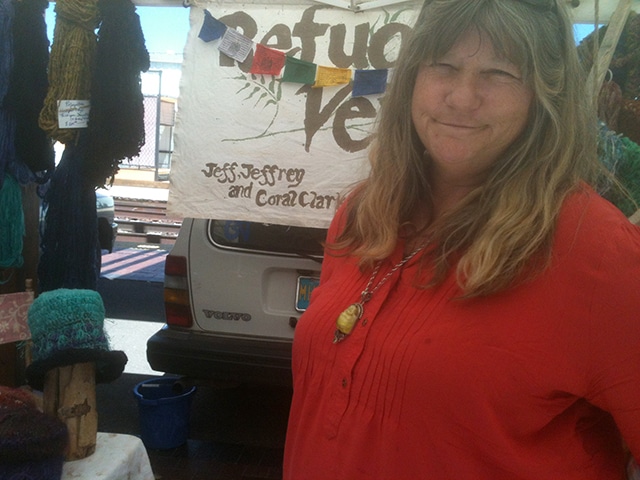 Clark figures she‘ll need to seek a variance at the market to be allowed to sell goods with less that 80 percent local content. Warmer winters have also impacted how many wool hats and scarves she can sell at the market, she so she’s considering ways to sell her goods in the Midwest. She’s not giving up on farming, but she is not optimistic either. “My understanding is that it takes years to come into and out of a drought, and when you add in climate change, who can predict?”

Drought a Concern, But It Could Be Worse

“The current drought is a major concern, but it’s not the worst seen in the Southwest,” says Sam Baca, program director of the Farmers Market Institute, which helps farmers in the market’s 15-county region with education and microloans. I called him shortly after my visit. He is proud of the microloan program, which has made 150 loans totaling nearly $500,000 in five years, including many for drip irrigation systems, and he mentions the Institute’s work connecting farmers to grant programs as well. “A lot of farmers are managing, though water is tight, “ Baca says. “It depends on where they are—those who rely on the Rio Grande are okay, but people in the Pecos Valley (southeast of Santa Fe), like Coral, have worse conditions. People furthest downstream from their acequia are affected worse.”

Aware that I am not from the Southwest, Baca asks me if I know about acequias. Yes, I had heard about them from several market vendors, I told him. I’d also read about them in Edible Santa Fe magazine. The Spanish word refers to a centuries-old system of ditches used to control and allocate winter runoff from rivers, dams, and other water sources for irrigation. The biggest current problem, says Baca, is dry winters with low snowfall, such as the last three winters.

After talking with Baca in early July, I called him in August to ask about the annual summer monsoon rains. I had heard a story by NPR reporter John Burnett about New Mexico’s unusually heavy July rains and a temporary easing of drought conditions. Baca’s response was measured. “We’re not out of the drought while we still have low snowfall, and while rain is good, hail is not. We had several farmers whose crops were damaged or destroyed by the hail.”

My takeaway from visiting the Santa Fe Farmers Market: If you care about the various issues facing small farmers—which surely impact eaters as well—enjoy shopping at your local farmers market, but take the time to talk to the farmers and other vendors, too.