Connect with a Farmer: Take a Farm Tour

dOne reason that families join CSAs is to have a connection with the farmer who grows their food, and the farm where it comes from. How they connect with that farm varies a lot, and it may or may not include on-farm pickup of CSA shares, volunteer workdays, member potlucks, canning parties, or other events. […] 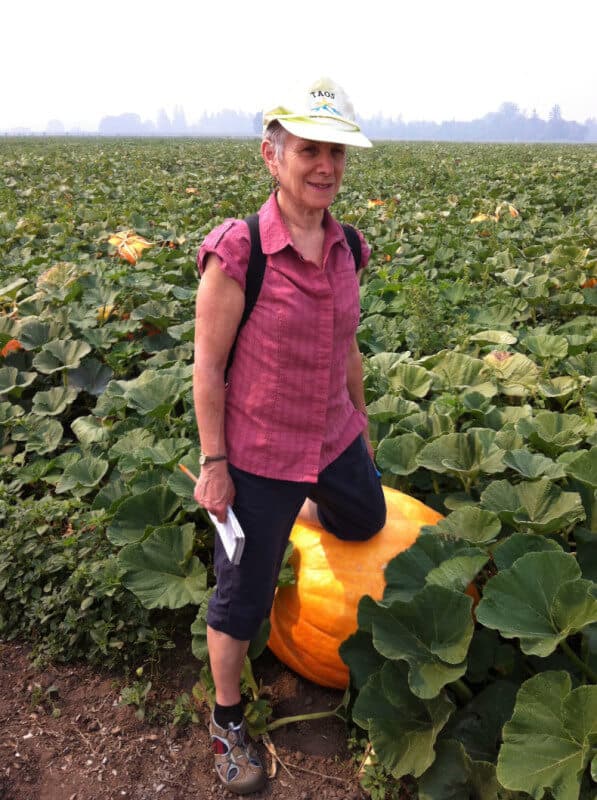 dOne reason that families join CSAs is to have a connection with the farmer who grows their food, and the farm where it comes from. How they connect with that farm varies a lot, and it may or may not include on-farm pickup of CSA shares, volunteer workdays, member potlucks, canning parties, or other events.

With the growth of urban farming, it’s getting easier for city people—CSA members or not—to visit a nearby farm, including ones with educational activities for children and families. You can read more about such farms in Bounty from the Box: The CSA Farm Cookbook.

Many farms offer tours that are open to the general public, such as the one that I went on in August. It was an annual bus tour organized by three local food co-ops in Portland, Oregon. I just signed up with a few friends, and we joined a group of about 35 people to spend a Saturday visiting three farms located west and south of Portland.

Two of the farms we visited sell their produce to local food co-ops; the third and smallest farm sells its produce at two farmers markets, one of them year-round. All three farms use organic growing practices, and the two that sell wholesale are actually USDA-certified organic. One farm has a CSA program.

The farm that I was most eager to see was Ayers Creek Farm, set on 144 gently rolling acres in Gaston, Oregon, and owned by Anthony and Carol Boutard. Anthony, who served as our tour guide, is widely recognized as an expert on sustainable farming and, although he made no mention of it on the tour, he is the author of Beautiful Corn: America’s Original Grain from Seed to Plate, published in 2013. Ayers Creek specializes in Chester blackberries as well as dry beans, corn, and other grains. The Boutards sell to several grocery stores as well as restaurants that take great care in carefully sourcing their ingredients. They have had a booth at a Portland-area farmers market for years, but 2015 is their last at the market. (Why they are leaving the market is a long story or “rant,” as Anthony describes it, related partly to the cost of going to the market, but mostly to his perception of a lack of city support for farmers market infrastructure). 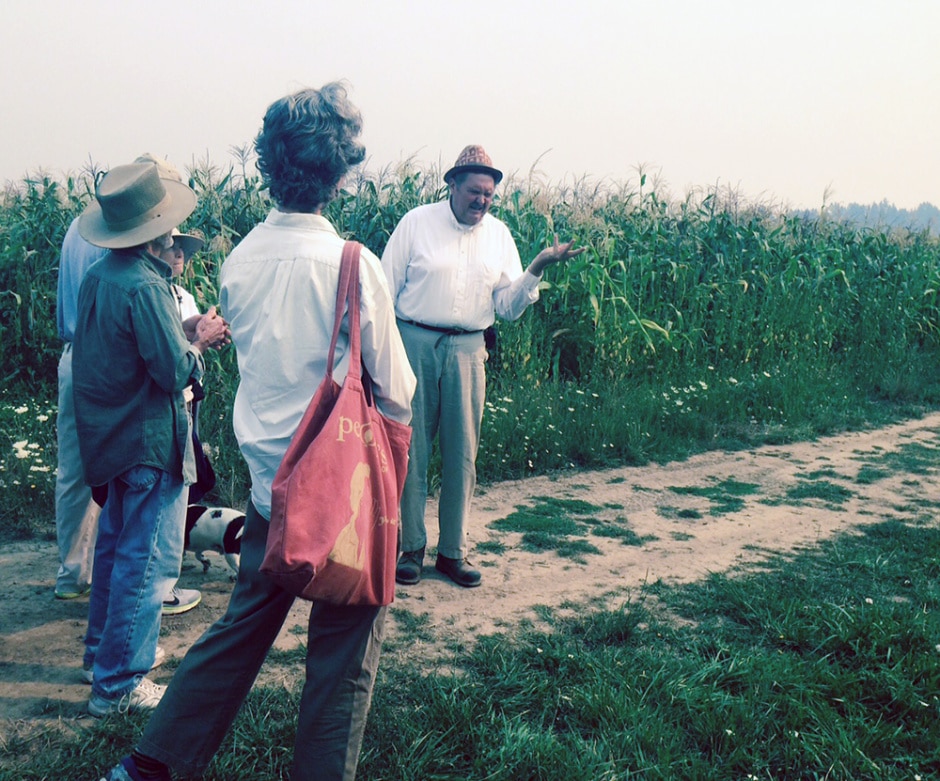 Anthony Boutard of Ayers Creek Farm of Gaston, Oregon, explaining to visitors about the crops he grows, which are carefully chosen for very specific characteristics. Photo by Martha Wagner.

Chemistry and geography all in a day’s work

One could not wish for a more engaging tour guide than Anthony Boutard. As he led our group across the farm, we heard interesting details about his corn, blackberries, and grapes; about watering practices (primarily drip irrigation) and drought (not yet much affecting him); and about his trust in his longtime work crew, who are paid $13 per hour and have on-site housing. Boutard’s deep education (Yale School of Forestry & Environmental Studies) and his background in natural sciences were clear from the start of the tour when he pointed to the Periodic Table of Elements—“very important”—on the wall of his processing and storage building. Pointing to a world map on another wall, he explained, “We’re on the same 45th parallel here as northern Italy, the Dordogne in France, and Hokkaido, Japan, so we look to these areas for some of the crops we’ve introduced, like our Italian chicory that we call Arch Cape, and our aduki beans from Japan.”

The Boutards take pride in careful experimentation. The farm produces many of its own seeds through a long, methodical process of seed selection focused on specific characteristics. They work closely with restaurants to supply them with, for example, Amish Butter corn, which is ground into a delectably creamy white polenta.

Our second stop on the farm tour was Mustard Seed Farms in St. Paul, Oregon, where longtime farmers David and Nancy Brown grow 88 acres of vegetables for the wholesale market, a CSA, and several food co-ops. Their specialty is giant pumpkins and other winter squash, some of them large enough to sit on (or kneel on, as I did in the picture at the top of this post).

After a picnic lunch, we were back on the bus headed for Flying Onion Farm in Oregon City, a small farm where Mark Bassik grows fruit and vegetables for two farmers markets on just under four acres. His land comprises three separate fields, one of which is part of the Mahonia Land Trust Conservancy. The fields are surrounded by hilly forest, while a large hoop house in one field is used for tomatoes, peppers, cukes, okra, eggplant, and melons in the spring and summer, and greens in the fall and winter.

My tour takeaway #1: If you want to know more about what it takes to get sustainably grown food from farm to your kitchen, find a way to visit a local farm or two—a tour, a cooking or gardening class, a U-pick harvesting session, etc. If you are lucky enough to live near a farm that hosts special dinners or has its own restaurant, take advantage of such an opportunity. I recently had the pleasure of eating a delicious lunch at Farm Stand, the wonderful on-farm restaurant of Gathering Together Farm, a CSA farm in Philomath, Oregon. I lingered awhile at the farm after eating, snapping a few photos (see below) with the friend I had met there for lunch. 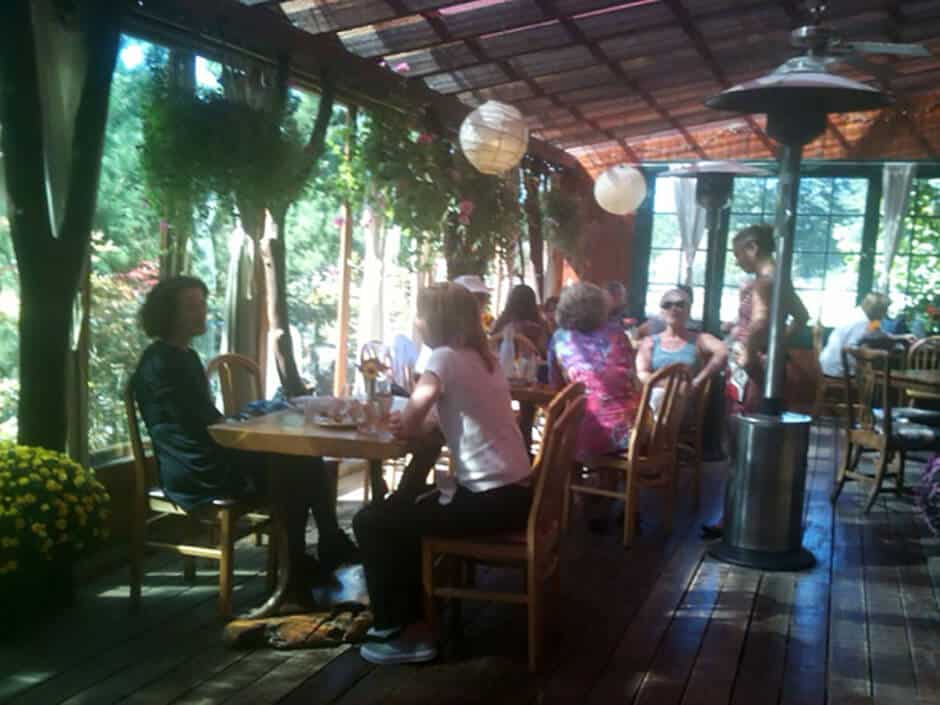 Lunch at the charming Farm Stand, the on-site restaurant of Gathering Together Farm in Philomath, Oregon. Photo by Martha Wagner.

Tour takeaway #2: If you or a friend of yours is of the mindset that food grown by local farms is too expensive, then you should visit a farm or two. Get a sense of the hard work being done to grow good food and keep family farming alive. Americans spend on average about 6.4 percent of their annual consumer expenditures on food, according to the United States Department of Agriculture (USDA), less than any of the 83 other countries it tracks data on. The common explanation for this has to do with the true costs of food showing up in environmental degradation, lax safety measures, government farm subsidies, and unjust labor practices. Visiting a farm will give you the opportunity to decide what you want to support when spending your food dollars.

About the author: This week’s blog post comes from Martha Wagner, a Portland, Oregon-based food writer, gardener, and passionate advocate for sustainable living, wellness, and organic agriculture. Photo at the top is Martha in the pumpkin fields at Mustard Seed Farm in St. Paul, Oregon (taken by Heather Carver).