The global pandemic disrupted food access for many people, especially Americans in the most marginalized populations. But it also spurred remarkable solutions using creative thinking, smartphone technology, and the sheer boots-on-the-ground human drive to help the hungry, one person at a time. Here are several inspiring stories. 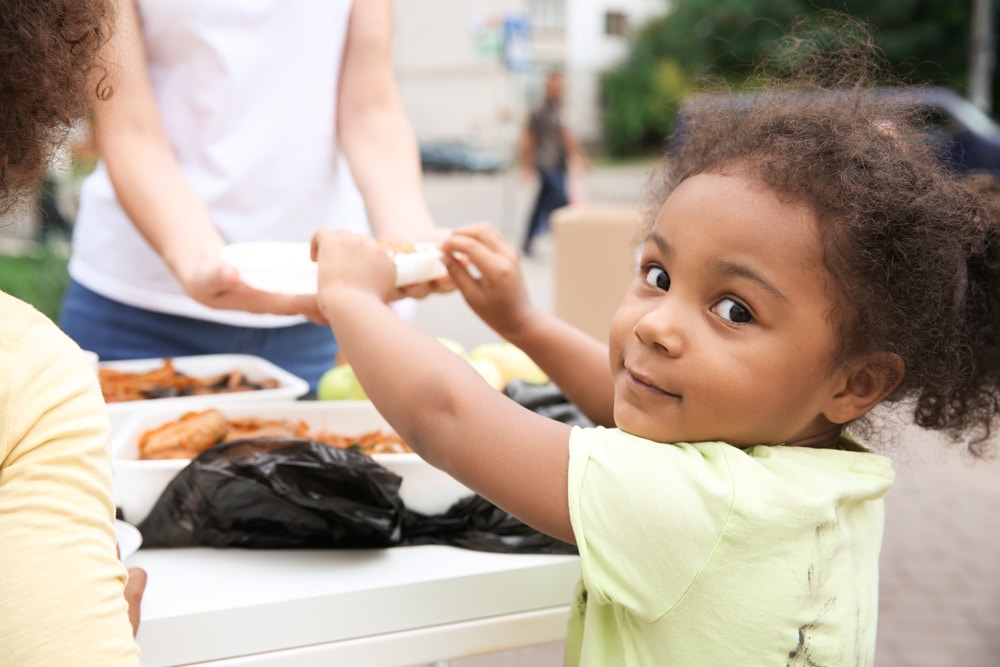 No matter where you live in the United States or the size of your household, it’s likely that you and your family experienced changes in food access since March 2020 as a result of the global pandemic. Plus, you’ve had to adjust to the worst rise in inflation in four decades.

To stretch your food budget and increase your food security, you might have planted your first garden or expanded an existing one in 2020, or maybe you signed up for a community-supported agriculture (CSA) share at a local farm. If you lost a job, you might have applied for and received Supplemental Nutrition Assistance Program (SNAP) benefits. Perhaps you started ordering groceries online, visited your local food pantry or food bank, tried a produce delivery service like Imperfect Produce or Misfits Market, or asked everyone in your household to pitch in with making meals.

Around the country, thousands of churches and nonprofit groups have been helping feed people who lack housing and food—including those living in tent camps or unable to access a food bank or pantry because of illness, lack of transportation, or required red tape. This blog post looks at a mobile alternative to a soup kitchen, “free fridge” programs around America, and some innovative new solutions for reducing food insecurity. 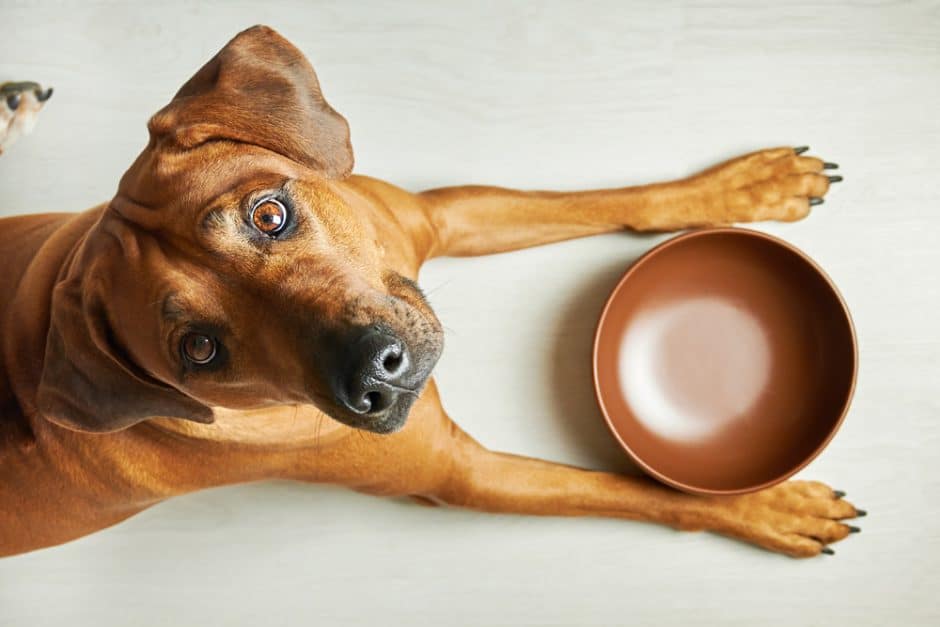 Starting in the Great Depression in 1929 and in other times of mass unemployment, soup kitchens run by churches or private charities helped feed huge numbers of people. Today, soup kitchens still exist, but so do many other kinds of meal programs.

Jenn Louis, a longtime resident of Portland, Oregon, and former owner of three highly acclaimed local restaurants, did not foresee that she’d be delivering soup—and more—to people experiencing homelessness, but the Covid-19 pandemic opened her eyes to the increasingly visible tent camps in her city in the fall of 2020. “I couldn’t keep driving by them without doing something. My boyfriend had cleaned out his closet and had some warm sweaters to donate, so I started with that, but the next day I bought some rice and beans, made a hot meal, packed it in a cooler to keep it warm, and made my first delivery to seven homeless camps.”

Many months later, Louis now has a core group of about 15 volunteers who sign up for weekly shifts on her website. A long list of businesses and organizations donate labor, food, and basic nonfood supplies to keep the Common Good Project, initially called the Homeless Relief Initiative, operating.

Hot meals, sandwiches, and snacks are delivered to tent camps two or more days a week, along with nonperishable foods, toiletry kits, batteries and headlamps, socks and underwear, and even dog food. On another day, the group takes men’s and women’s clothing, blankets, sleeping bags, and more to the same camps. Louis estimates that they’re helping out about 30 to 40 people on a regular basis. 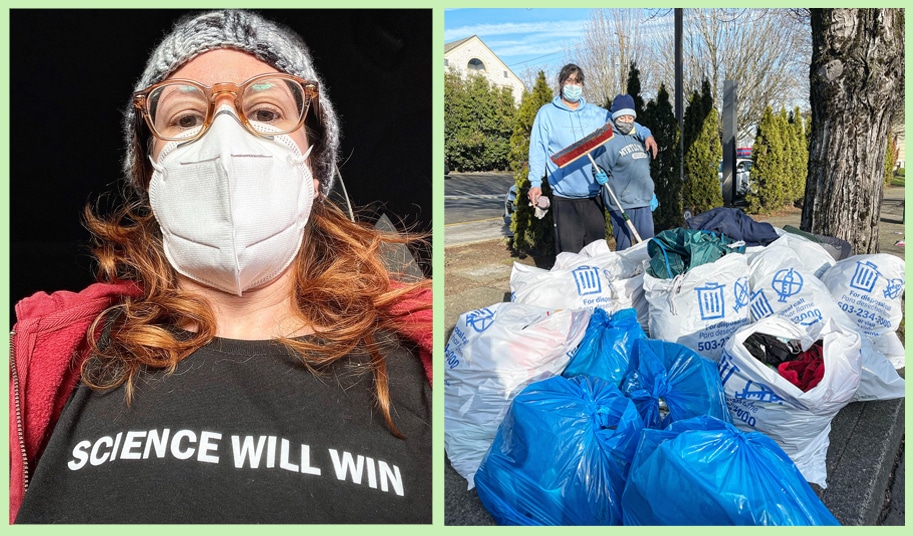 Above left: Jenn Louis, founder of the Common Good Project, which provides food, toiletries, and other essentials to people without shelter in the Portland area. It also offers them outreach and employment opportunities to help clean up the streets in Portland. Above right: Two cleanup work crew members with bags of trash gathered from homeless camps and other areas.

“If I provide some basic food for the same people on a regular basis, I build trust and believe their lives will be easier,” she says. “Everyone can ask for all that they want or need and I make sure to ask them what they need at each visit.”

With funding from several local government grants, Louis began organizing cleanups at tent camps, employing camp residents to serve as team leaders and work crew. This spring The Common Good Project, including camp cleanups, became a program of Trash for Peace, a Portland nonprofit that offers outreach and employment opportunities related to cleaning up Portland streets.

While local politicians continue to discuss issues related to homelessness year after year, Louis doesn’t have a solution in mind. She’s grateful to be able to offer food and other necessities with an open heart and without judgment. Her belief is that the people she helps can choose their next step, whatever that is. “All I want is that their basic needs are met,” she says.

An award-winning chef, Louis is also a food writer and author of three cookbooks, the newest being The Chicken Soup Manifesto, a taste of which you can find in this recipe for a soup from Afghanistan. The book is available through her website: Jennlouis.com. 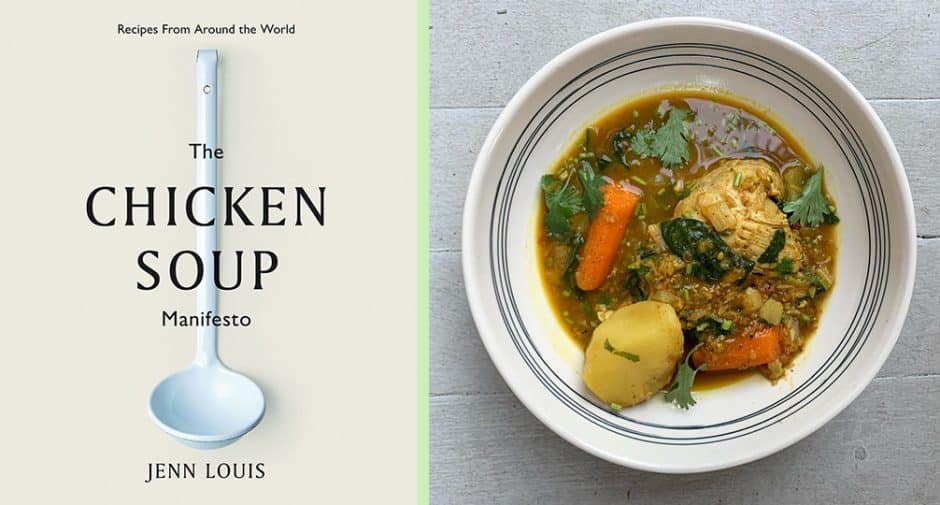 By late 2021, SNAP was providing food assistance to one in eight people in America, while other government programs supplied emergency food aid through farmers markets and school programs. Yet food insecurity remains an unrelenting reality for many people—which is where mutual aid projects organized by informal groups and nonprofits across the US and beyond have played important roles in expanding food access.

You might not be familiar with the term “free fridge,” but a quick Google search leads to numerous media stories. Freedge.org, a website that lists worldwide community refrigerators stocked with free food, estimated conservatively that the US had 400 free fridges by late 2021 and that nearly all of them had been created since the start of the pandemic.

“Take what you need and give what you can” is the primary free fridge movement principle; reducing food waste is a secondary goal. Aside from these, no two programs are identical.

In Florida, Buddy System MIA operates 10 free fridges in neighborhoods with the greatest need across Miami-Dade County. At the time of this writing, the fridges serve an estimated 5,000 people a year and engage 1,100 volunteers to “rescue” fresh, nutritious food that might otherwise be tossed out by grocery stores, farms, restaurants, and other places. Buddy System also manages fridge locations and organizes special events such as sandwich-making in coordination with a poetry advocacy group.

About 200,000 pounds of food—enough for 100,000 meals—were diverted to this community fridge network in 2021 alone. Some of the many organizations that Buddy System partners with include Trader Joe’s, Good Samaritan Meals, Food Rescue US, Buchanan’s Whisky, Be the Change Florida, Farm Share, and the Miami Foundation. 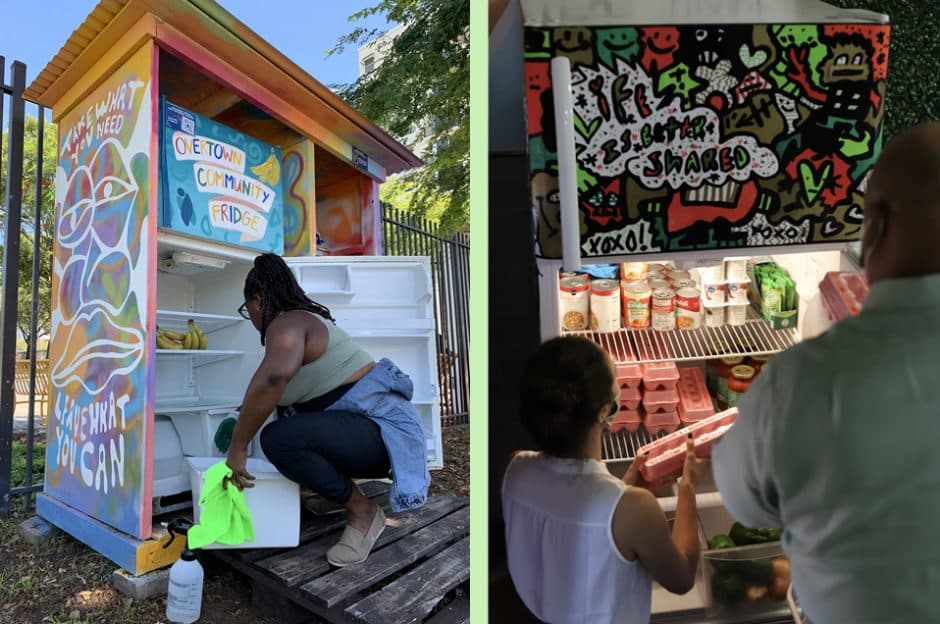 The Miami nonprofit began in 2020 as a grassroots project by a group of local artists and community organizers who wanted to make each fridge an artist’s personal statement, create welcoming places for people to gather, and help destigmatize the shame that many people experience when seeking help. Before all the fridges were in place at their indoor and outdoor locations, a Homebound Food Access Program began that paired elderly or disabled people experiencing food insecurity with a volunteer in their neighborhood who could access food pantries and other resources on their behalf. This program currently serves 300 households.

“We partner with food pantries, but we know that 98 percent of them have barriers to access, like limited hours or a lot of required paperwork,” explains CEO Kristin Guerin. “With our free fridges, we have no application process. If someone is undocumented or feels unsafe going to a food bank or pantry, we can help. We serve a lot of people of color, LGBTQ folks, and minorities. About 85 percent of our clients are seniors or people in emergency situations.” 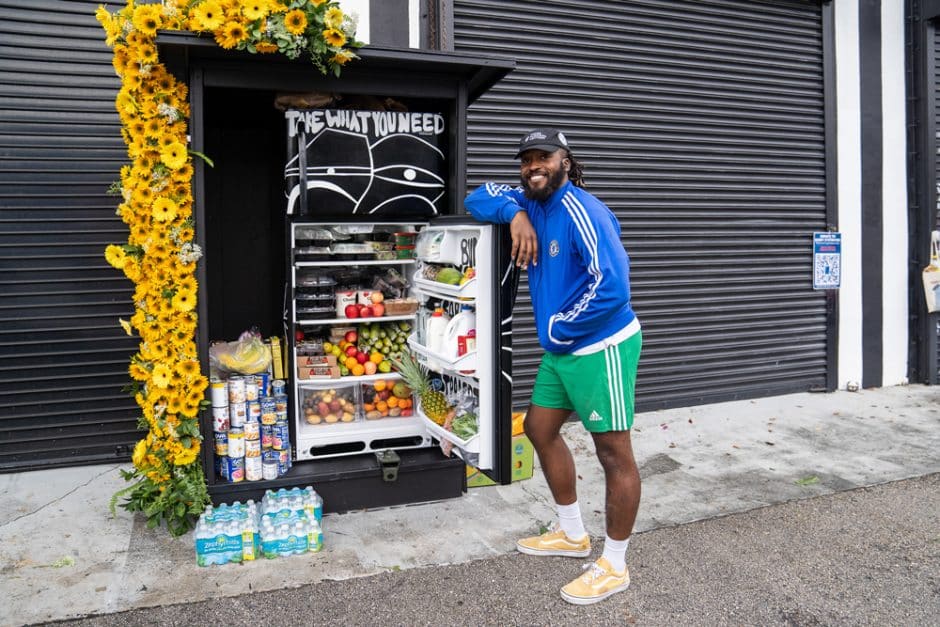 Guerin recognizes that her organization and other free fridge efforts to improve food access are minuscule compared to the scope of the problem, but she is proud of what Buddy System has accomplished to mitigate food insecurity. At the same time, she acknowledges that the organization needs to stay focused on long-term change. Community fridges are a Band-Aid,” she says. “Our ultimate goal is to end food insecurity.”

While the global pandemic has exacerbated food insecurity, it’s also spurred on new programs and new thinking about solutions. One idea that’s been in the planning stage for several years was described in a March 2022 article reprinted from Food Bank News. Community Food Club is a new kind of food pantry that looks and operates like a grocery store but uses a sliding-scale membership fee as a way to “bring dignity to the process of accessing food,” according to its website. It’s also quite unusual in its emphasis on more nutritious fresh fruits and vegetables in contrast to the processed foods heavy in carbohydrates, starch, and sugar that dominate most food aid.

The exterior and produce area of the Community Action House Food Club in Holland, Michigan.

The idea was developed by a group of nonprofit executives influenced by the book Toxic Charity, which examines disturbing truths about charity. To date, only two of these new food pantries exist, both in Michigan, but the Club’s Replication Kit is freely available to anyone in the hope that this will be used to expand the model nationwide.

A very different solution now being used in 10 American cities is Bento, which promises to eliminate hunger and food insecurity one text message at a time. This SMS text-messaging service was named one of Time magazine’s “Best Inventions of 2021” and received an honorable mention in Fast Company’s “World-Changing Ideas Awards 2021” (under Bento’s parent company, Not Impossible Labs). 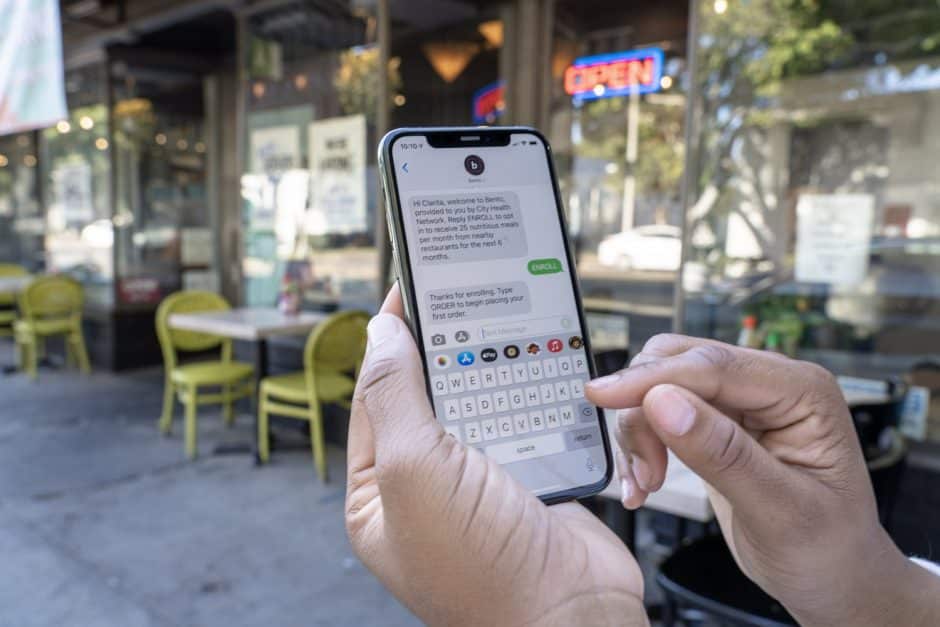 Bento is a smartphone app that helps people who need food assistance and may have special dietary needs connect with nearby restaurants and grocery stores seeking to reduce food waste.

Bento partners with local organizations like Boys & Girls Clubs and government agencies to enroll people who need food assistance, enabling them to use their cell phones to order free meals from nearby restaurants or grocery stores tailored to their dietary needs. Since its launch in 2020, Not Impossible Labs says it has supported more than 3,500 low-income individuals and families in more than 30 pilot programs across the country in partnership with various healthcare and community organizations.

The idea is that restaurants already have the food and staff available, while participants get sustenance and convenience without the social stigma of being seen standing in line at a food pantry. According to a spokesperson quoted on its Facebook page, Bento plans to eventually sell its program to the healthcare industry, especially health insurance companies.

Food insecurity and lack of food access are so complex, with inextricable links to climate change, social infrastructure, housing and healthcare insufficiency, and food waste. For the past several months, I’ve been watching wrenching videos from Eastern Europe of huge feeding centers set up by World Central Kitchen, serving thousands upon thousands of meals to war refugees streaming out of Ukraine.

And I feel incredibly grateful for the abundant resources in my own town, which include food pantries (including one at the local university), weekly farmers markets, and CSA farms, as well as Growing Ancestral Roots, a project aimed at honoring food traditions of Black, Indigenous, and people of color.

About the author: Martha Wagner is a Corvallis, Oregon-based writer, editor, and a fervent supporter of organic agriculture, sustainable family farms, and eating what’s in season.