This has been a year of travel for me. Some of it has been to places exotic and exciting like New York, Paris, London, San Francisco, Los Angeles, and San Diego, but also to others not so well-known but still wonderful and beautiful—like the American Midwest and the delightful college town of Eugene, Oregon. Everywhere […] 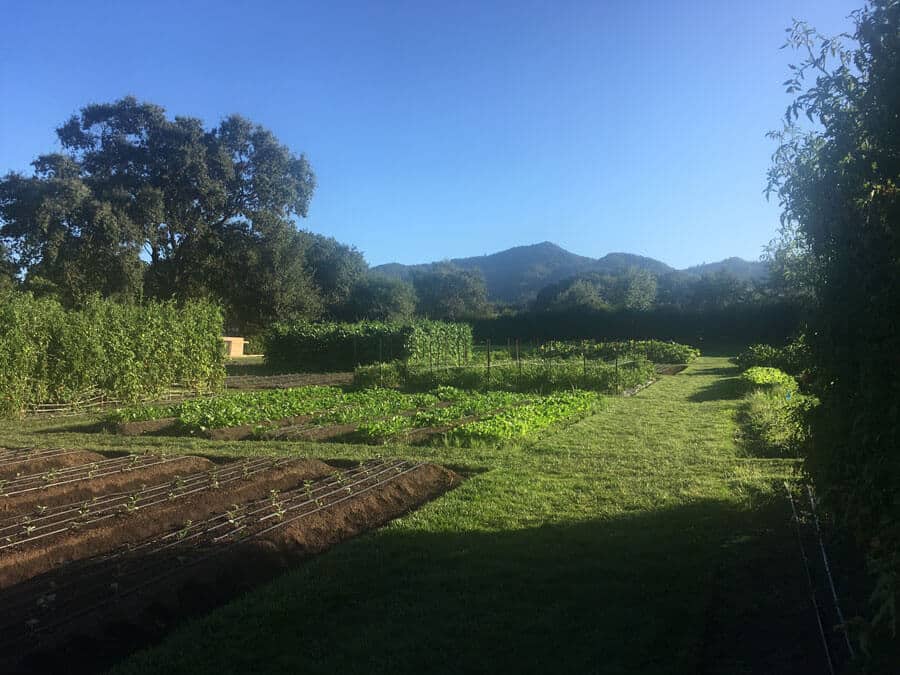 This has been a year of travel for me. Some of it has been to places exotic and exciting like New York, Paris, London, San Francisco, Los Angeles, and San Diego, but also to others not so well-known but still wonderful and beautiful—like the American Midwest and the delightful college town of Eugene, Oregon.

Everywhere I go, I look at nature and how it manifests, whether it’s a city of concrete in Manhattan or someone’s backyard in the Pacific Northwest. I believe that the presence of nature in our lives is a good indicator of the quality of that life because we humans are still biologically and psychically linked with the natural world. Science is proving these links and their effects on our health and well-being. On my travels this year, I found three examples of growing food that deeply enchanted me.

I got a premonition of the first one during a stroll through Marais, an eclectic neighborhood in Paris. I was passing a tiny florist shop that had houseplants for sale, but out of the corner of my eye, I spotted something that made me stop and back up to do a double-take: It was a little pot of chervil, an herb that is not popular in America but is a staple in French cuisine. This delighted me—a confirmation that savory things are still valued enough to be grown on windowsills in the tiniest apartments in crowded Paris.

A few days later, I was walking through the ultra-ritzy Galeries Lafayette shopping plaza on the famed Champs-Élysées. Tourists from all over the world flock here to browse, drool, and buy thousands of overpriced fashions and gifts. There is a decidedly upscale food hall on the lower level, and among the caviar and single-varietal olive oils and coffees, there was this: 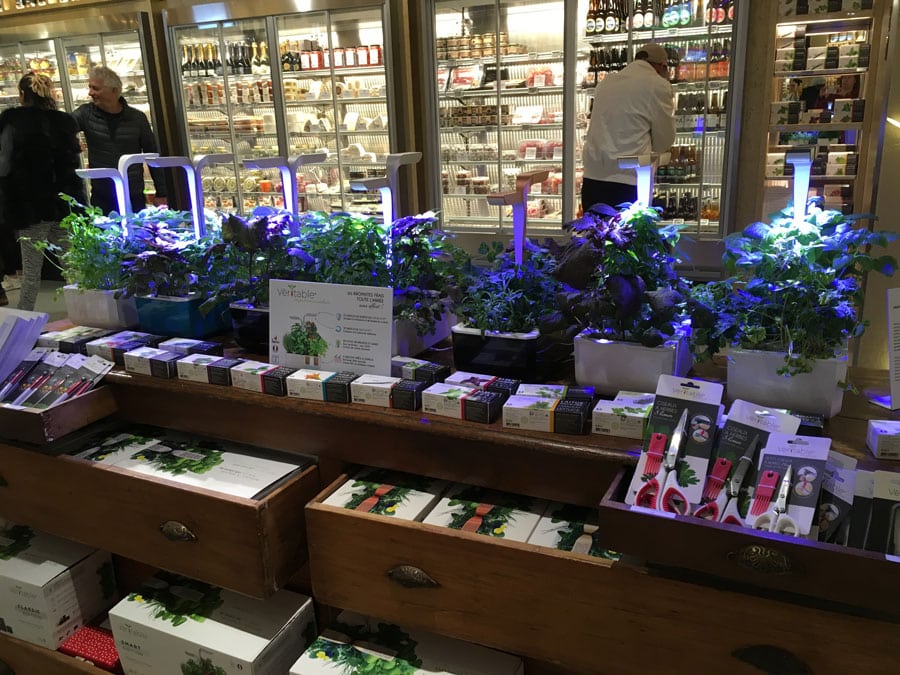 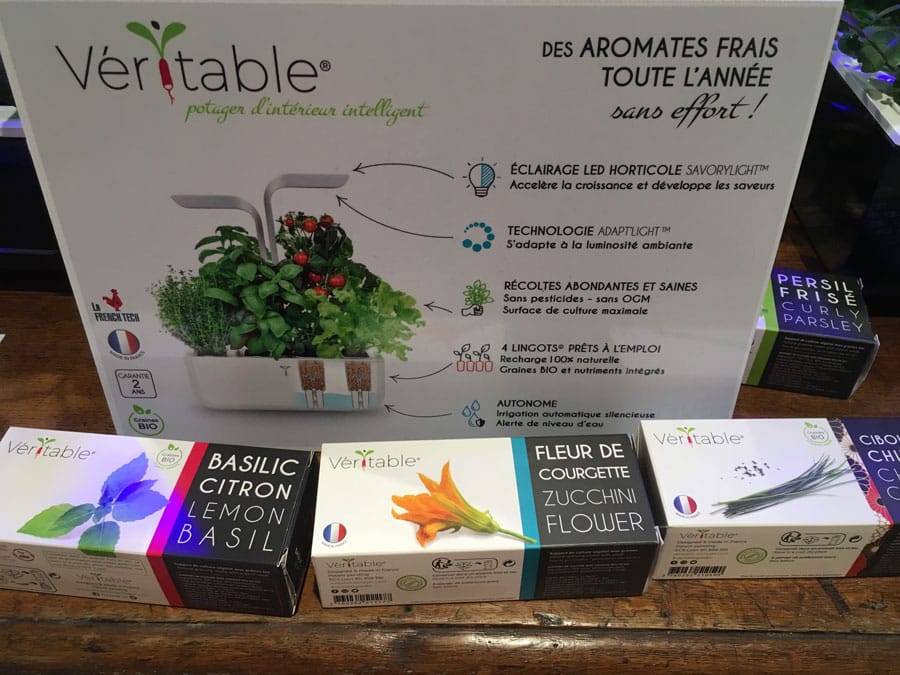 Véritable is a French company that designs tiny indoor vegetable gardens—and packages everything you need to grow your own aromatic herbs, mini-vegetables, and edible flowers at home. These ingenious kits come with their own little irrigation and lighting systems and can be refilled with fresh seeds and soil. Alpine strawberries, cherry tomatoes, chile peppers, basil, chives, parsley, zucchini flowers, pansies, watercress, and even Asian greens like tatsoi and shiso are among the delectable offerings. The planters are compact enough to fit into even the smallest of places—no excuses now not to grow and harvest your own!

About 5,234 miles away in the university town of Eugene, Oregon, is another unexpected treasure: The gardens of Dennis “Whitey” Lueck. Whitey grew up in Lancaster, Pennsylvania, and began going to school at Penn State for biochemistry but switched to horticulture, during which time he did an internship at the famous Longwood Gardens. He teaches landscape architecture at the University of Oregon, and his fabulous home gardens are open to the public, which attract all sorts of passersby, university students, out-of-towners, neighbors, and even school groups. In mid-August, a friend who lives in the area and I were on our way to visit his garden when she spotted Whitey bicycling home, so we caught up with him there.

His property is truly inviting and a must-see if you are into gardens or landscaping, or if you just want a peaceful respite. He grows an astonishing variety of fruits and vegetables in a relatively small space—all the produce that he consumes year-round, as well as plenty of extras for neighbors and the community. We got to taste a bunch of super-sweet grapes growing on an arbor on the backside of his house and coo to his chickens in their coop near the shed. Thank you, Whitey! 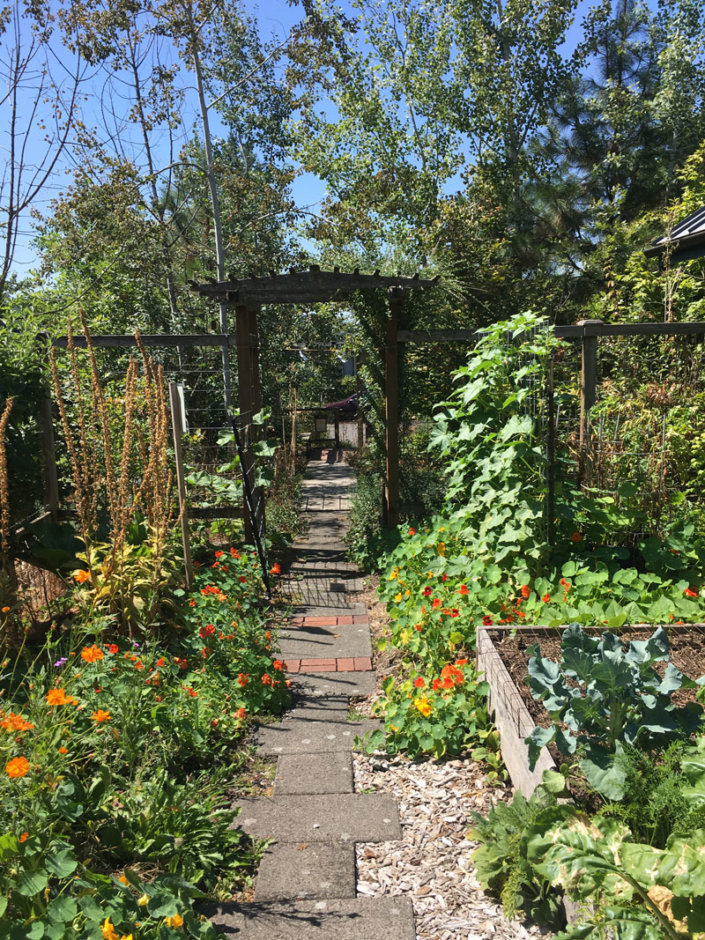 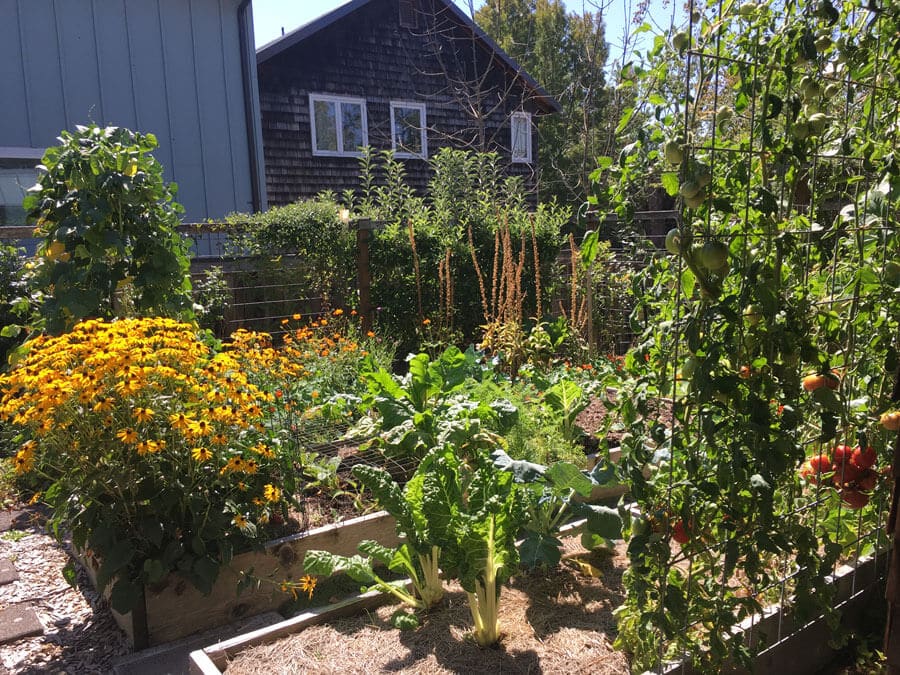 By far, my favorite part of his garden (it’s almost impossible to choose!) is this “tomato wall” that grows on the west façade of his house. This part gets the most sun and heat, which the tomatoes adore, but growing these vines up this entire side actually helps cool the house during summer and extends the life of the cedar shingles and painted surfaces by preventing the sun from striking them. What an ingenious way of pulling double-duty from plants—as both food sources and environmental instruments. If you’re ever in Eugene, go check out Whitey’s garden—you’ll be glad you did. 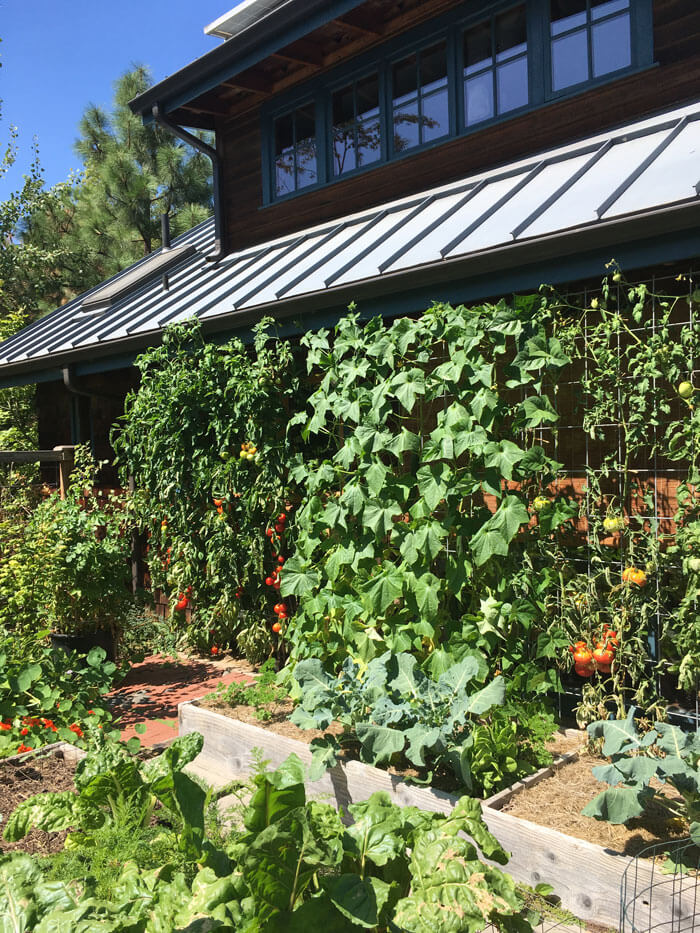 In the first week of September, my husband and I visited the little town of Yountville, California. You probably have never heard of Yountville (if you blinked driving by it on the highway, you might miss it), but you’ve probably heard of its more famous neighbor, Napa, and you probably also know its claim to fame, Chef Thomas Keller’s The French Laundry, considered one of the world’s best restaurants. I have never eaten there, as it is extremely difficult to get reservations (they book 6 to 8 months in advance) and I’m saving up spare change for their $400-per-person, prix-fixe-menu dinner.

But, I got to do something almost as good—walk through their incredible gardens, located directly across the street from the restaurant. This nearly three-acre culinary garden is open to the public and grows much of the produce featured at this restaurant and two other Keller-owned local restaurants, Bouchon and Ad Hoc. This was a fantastic time to see the gardens, right at their height of productivity—tomatoes, peppers, eggplants, potatoes, lettuces, beets, cucumbers, 12-foot-high Jerusalem artichokes, beans, onions, carrots, and herbs. I even spotted a chef walking through the beds to pluck something for that evening’s dishes.

The walkways around the more than fifty beds are all grass, which feels wonderful on the feet and maintains the lush continuity of growing things. 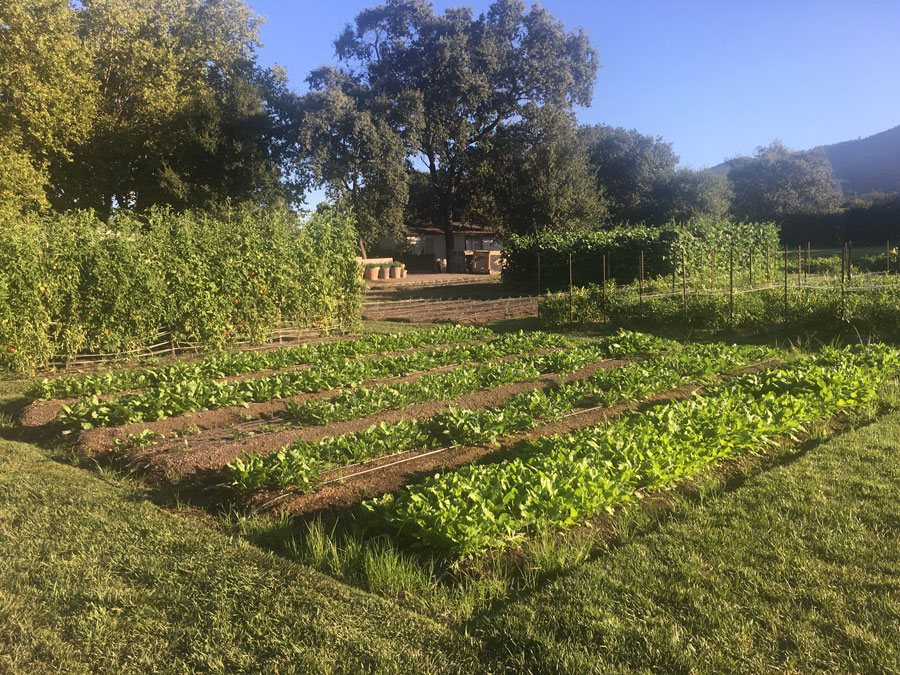 At times, the gardens have grown as many as forty different varieties of tomatoes. Some of them are raised in the hoophouses, along with seedlings and microgreens galore! 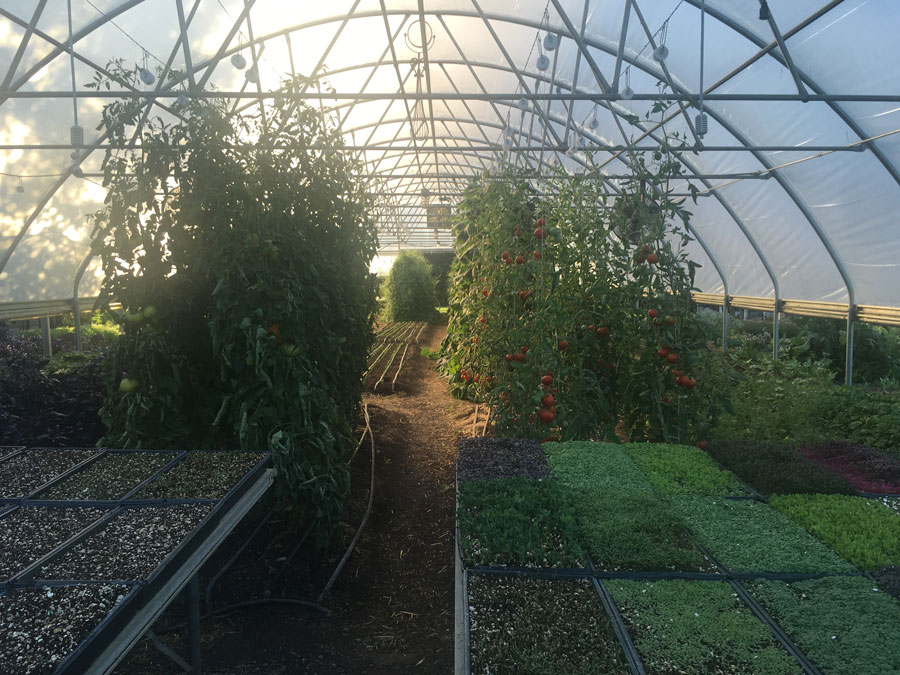 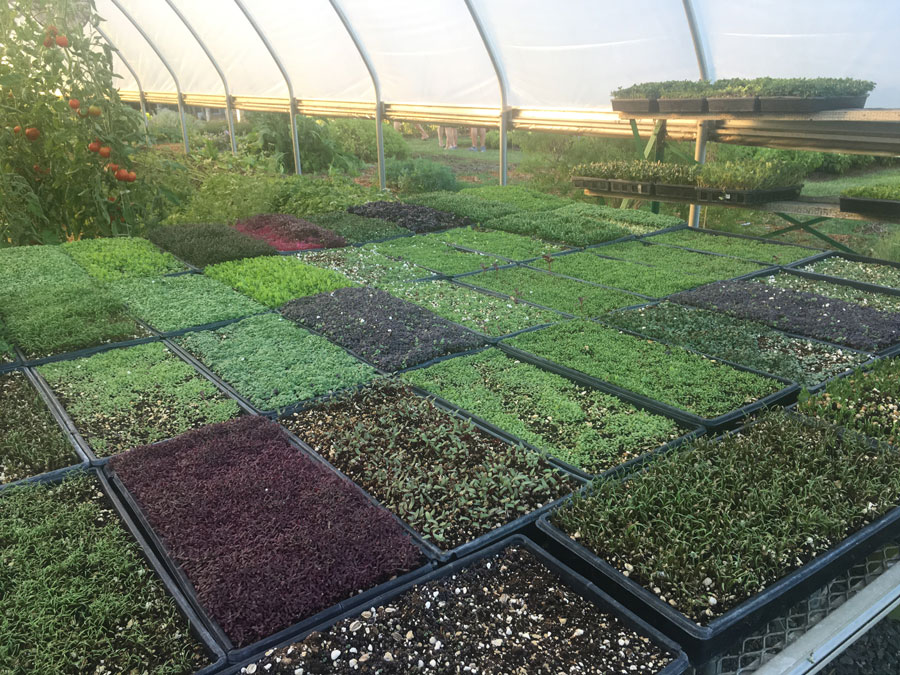 An astonishing amount of space is devoted to sprawling cucurbits, but I could not find a single fruiting squash in this plot, pictured below. Which leads me to believe that these plants are grown just for their flowers, which are a quintessential summer delicacy at the restaurant. What an utter luxury. 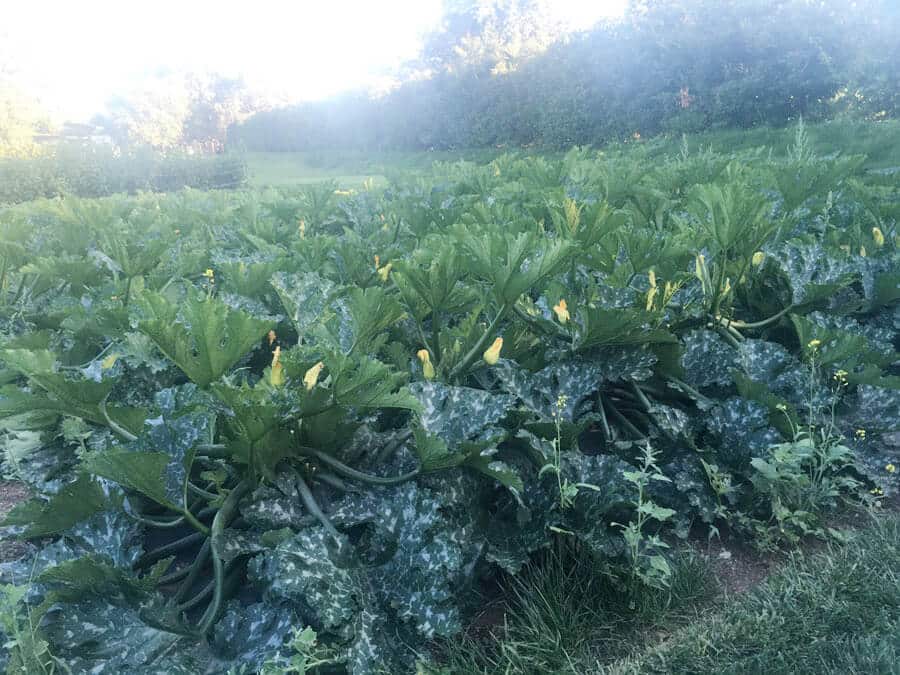 Not pictured are the beehives that provide pollinators and honey, the chicken coop that furnishes the freshest eggs, and a little wooden stand displaying a diagram of the garden and its plant varieties. If one lifts up the lid, there are copies of the diagram that visitors can take home for inspiration for their own backyard gardens.

And that is the ultimate takeaway of travel—learning, seeing, and experiencing joyous variations on some of the oldest human rituals, like growing food.