Postcards from the Road: Dinner with the Author in Minnesota

Yesterday afternoon, my trusty Subaru Nelly and I finally rolled back into Seattle, fresh from a trip of 23 days and 7,000 miles around the country that took me to 13 states. Among the highlights were a traffic safety conference in southern California (I have another life as a citizen advocate on this topic); a most […] 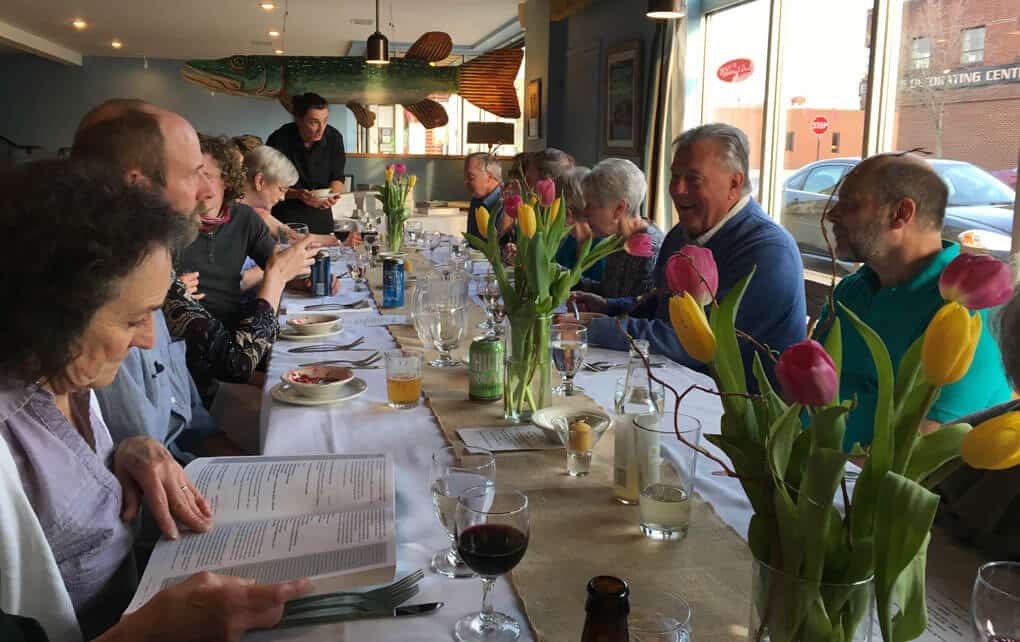 Yesterday afternoon, my trusty Subaru Nelly and I finally rolled back into Seattle, fresh from a trip of 23 days and 7,000 miles around the country that took me to 13 states. Among the highlights were a traffic safety conference in southern California (I have another life as a citizen advocate on this topic); a most lovely dinner that took place at a Minnesota restaurant in honor of my book, its recipes, and a Minnesota farmer; and plenty of adventures in between.

This trip was a good dress rehearsal for the upcoming 3-week-at-a-time book touring trips this year—to the eastern seaboard, the San Francisco Bay Area, back to the Midwest again, and then Florida. I will be spending an awful lot of time on the road, and Nelly’s suspension will be put to the test hauling hundreds of pounds of books across the country. 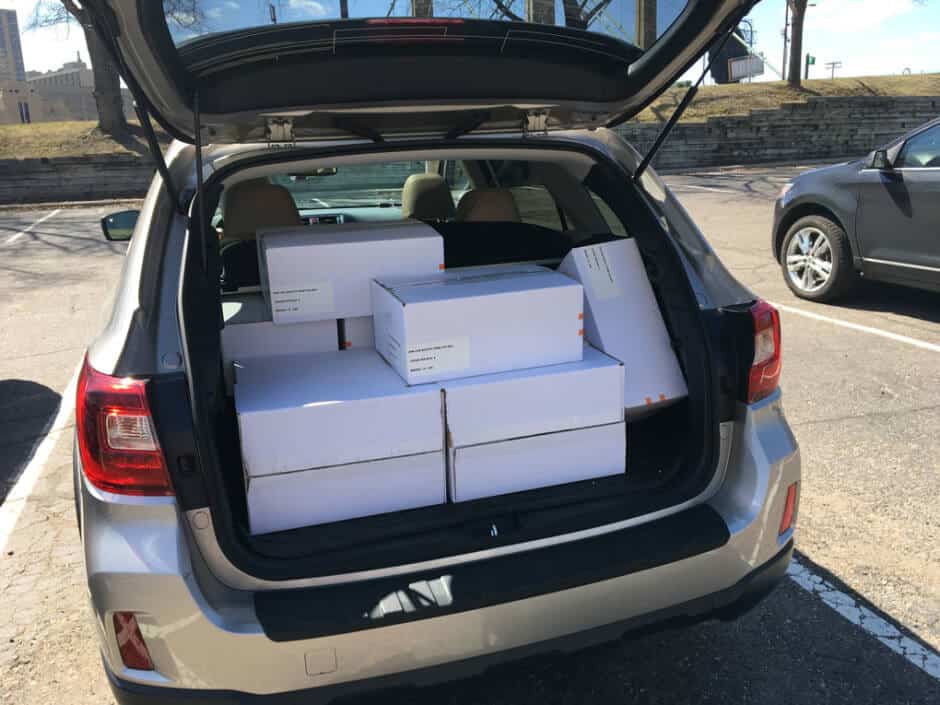 This was a trip of making new friends and reconnecting with lots of old ones. In the nearly 100-degree heat of Palm Springs, I got together with Jason Holland, the web genius behind this fantastic website and a friend and web designer I’ve known for over a decade now. And happily in Las Vegas, I finally met in person Elyse Hughes, the host of the fantastic Lifejam Blab show we did last November. She is such a sweetheart and is totally devoted to promoting great health and good eating.

Then it was on to considerably colder climes—to Wisconsin and Minnesota, where the sun was shining brightly but gusty winds whipped up a wind chill in the upper teens. The cold and the 70-degree temperature drop I experienced within 48 hours didn’t stop me from venturing out to one of my favorite spots on earth—the historic Mill District and downtown Minneapolis Mississippi riverfront neighborhoods. Pictured below is the St. Anthony Main area, with its great restaurants, movie theater, river promenade, and beautiful bridges—all in front of what used to be the home of the biggest flour mills in the world, back when General Mills and Pillsbury reigned supreme. 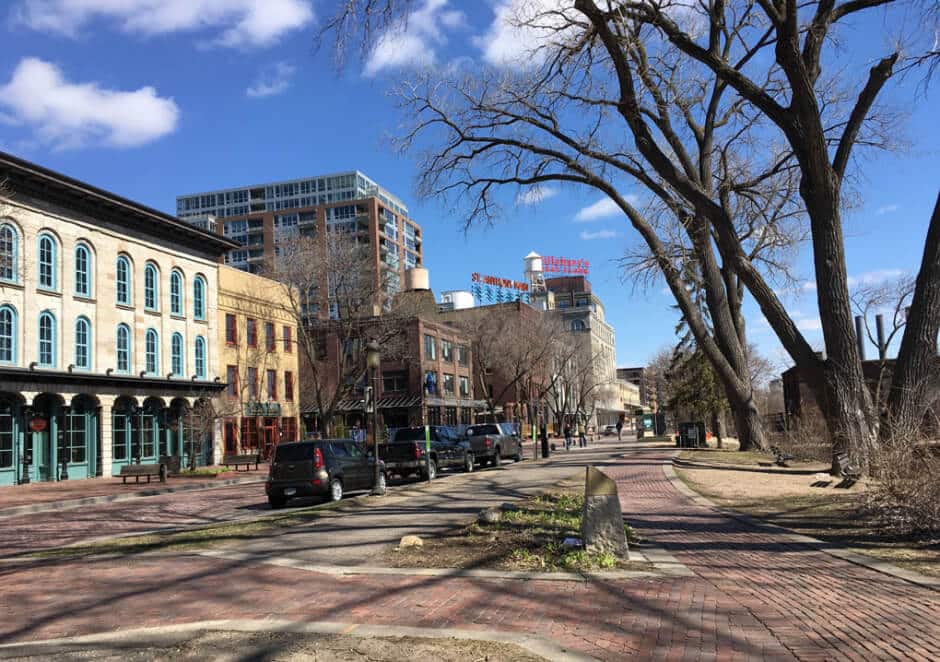 Minneapolis and Saint Paul, collectively known as the Twin Cities, were Ground Zero about 7 years ago for my first cookbook and Bounty‘s predecessor, The Featherstone Farm Cookbook. In fact, this book gained something of a cult following here and was even used at one point by the personal chef to the governor of Minnesota. And so in these early days of April, I started planting seeds for Bounty from the Box to take root, making a flurry of book deliveries and inquiries alike. Happily, the book is now already available at the Bibelot Shops, Mississippi Market, and the Minnesota Landscape Arboretum gift store.

Then it was off to La Crosse, Wisconsin, to hear Will Allen (who wrote the foreword in Bounty from the Box) give the keynote at a food ethics conference at Viterbo College. Allen was the first to establish a large-scale urban farm in America, called Growing Power, with the mission of providing fresh, nutritious food to some of the poorest residents of Milwaukee whose only other local food options were fast-food restaurants and convenience stores. In an age where leaders and politicians often talk loudly about transforming this or that, Allen is a doer, one who truly pulls together the community, partners, and resources that at first seem to hold little promise but soon blossom into operations with astonishing food production capability. Maureen Cooney, who works at Viterbo and helped me research farms for Bounty from the Box (without her, there quite honestly wouldn’t even be a book) and I were able to visit with Allen at a preconference reception before his speech. And yes, as a former NBA player, he is really tall. 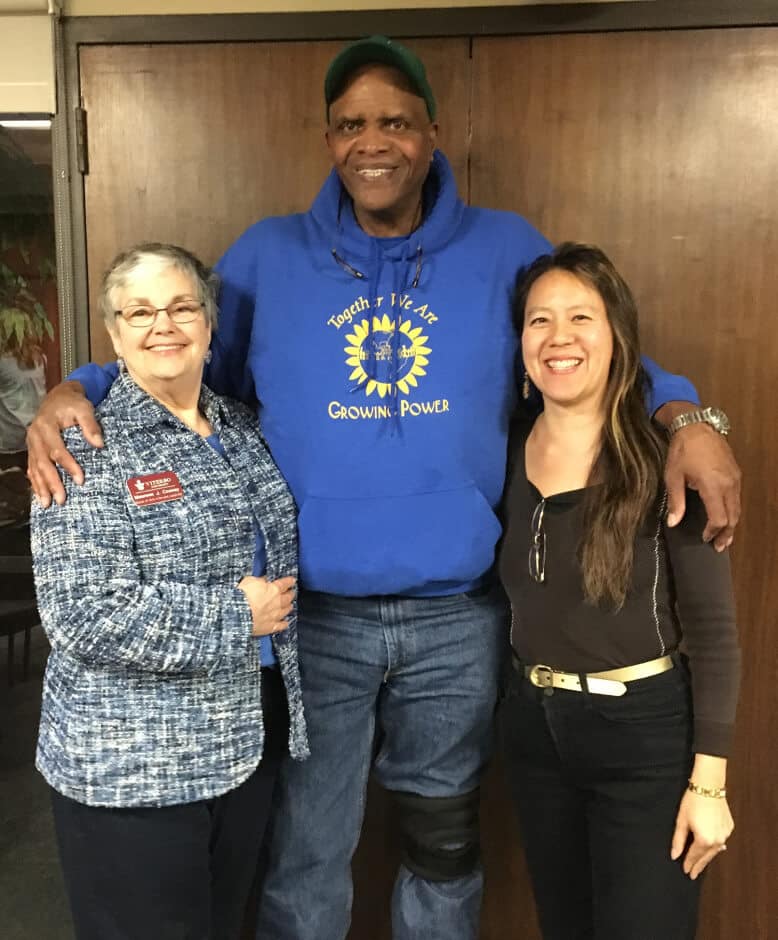 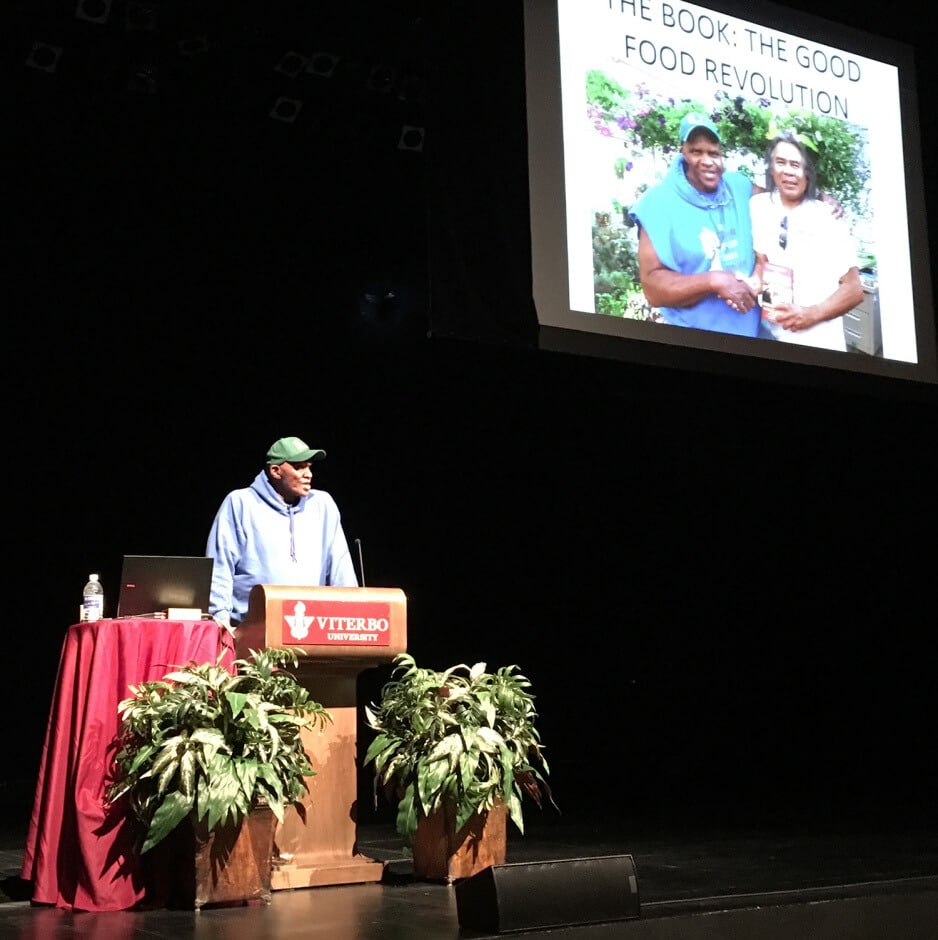 Last but not least was a much anticipated dinner at the Blue Heron Coffeehouse in Winona, Minnesota. The Blue Heron is an institution in this Minnesota river town, known for its delicious food, much of which is locally sourced from area farms and lovingly prepared for omnivores, vegetarians, vegans, and gluten-free eaters alike. They contributed several recipes in the book (including Sungold Salad with Feta and Cumin-Yogurt Dressing, Spinach and Warm Sungold Salad, and Creamy Green Bean and Mushroom Soup), and as such it was a truly pleasant surprise when they offered last winter to host a spring “Dinner with the Author” event, with a menu consisting entirely of recipes from the cookbook. 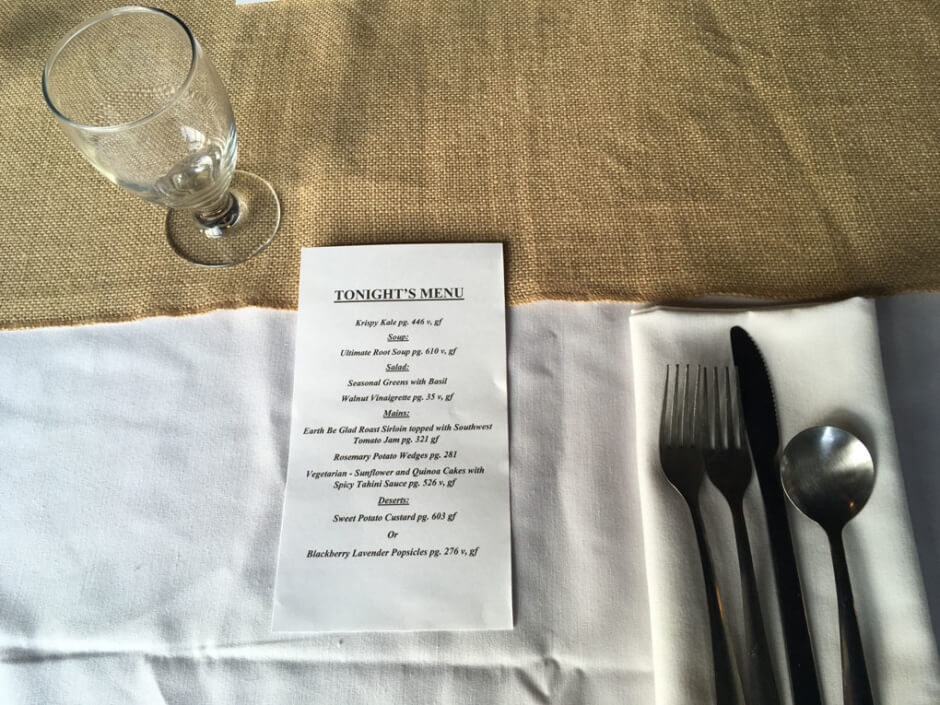 It was a highly ambitious menu, starting with an appetizer of Krispy Kale (just as addictive as potato chips but better for you), followed by Ultimate Root Soup and a salad of Seasonal Greens with Basil-Walnut Vinaigrette. The main course was Roast Sirloin with Southwestern Tomato Jam (a sensational distillation of rich summer flavors) and Rosemary Potato Wedges, or, for those who were vegetarian, Sunflower and Quinoa Cakes with Spicy Tahini Sauce. Dessert was a choice of Sweet Potato Custard or Blackberry Lavender Sorbet. This four-course dinner, priced at an astonishingly reasonable $35.00 per person, wowed with every bite, demonstrating that healthful food needn’t be boring or deprivatory in any way—quite the opposite, in fact. An enormous thank you goes to Colleen and Larry Wolner, owners of the Blue Heron, for making a truly scrumptious, memorable meal and evening! 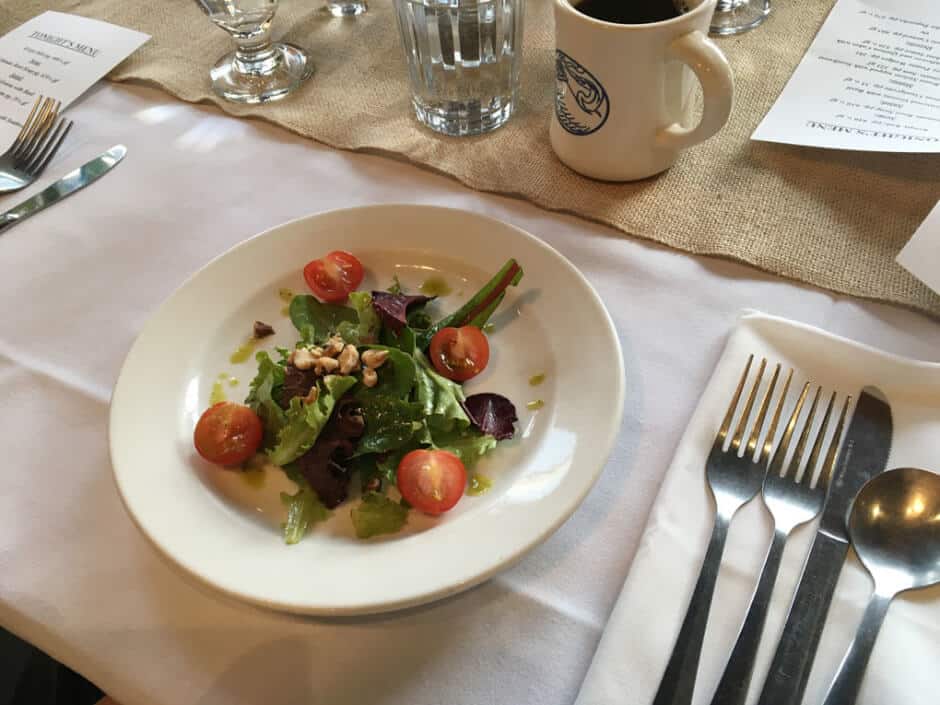 Happily, Jack Hedin of Featherstone Farm of Rushford, Minnesota, was able to take time from his hectic spring planting schedule and attend, and we both spoke at the dinner. His farm and its CSA are what inspired me to write two cookbooks in the past 16 years, and I am forever grateful for his support, generosity, and opening my eyes to a whole other world of organic farming, sustainable agriculture, and great produce. 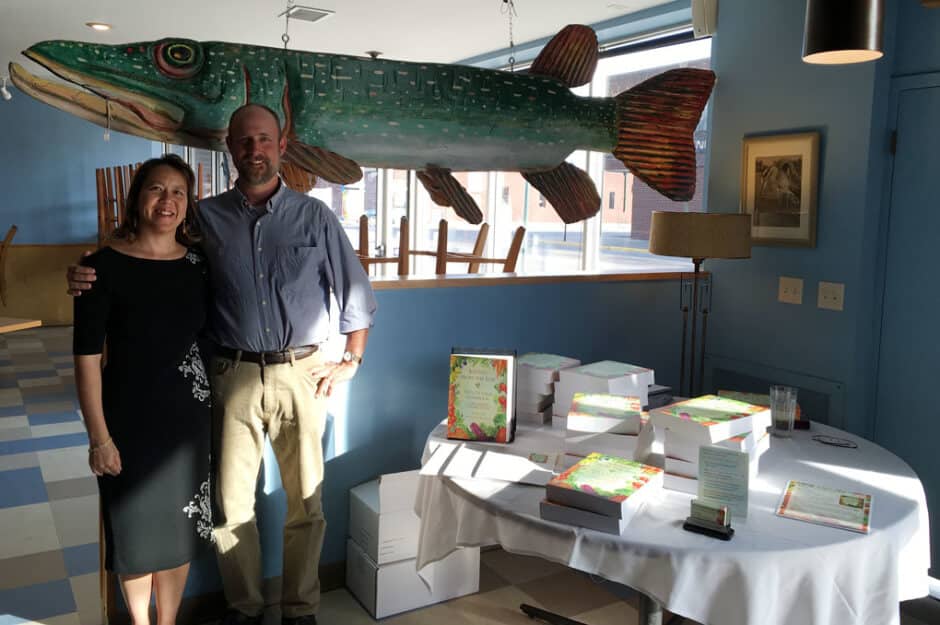 What’s next? A major book tour of the eastern seaboard states in early through mid-June: So far I have dates at an urban farm in Washington DC, at the famous Greenmarket in Union Square in New York City, at Sang Lee Farms and Bayard Cutting Arboretum on Long Island, and Strolling of the Heifers River Garden in Vermont. I hope to tour in Pennsylvania and along the Maine coast as well. Stay tuned to our Events page for more details, and Happy Spring!