This delightful recipe is by Michelle Abendschan, who writes the Fennel*Twist blog, formerly Je Mange le Ville. She notes, “I am a huge fan of potato pancakes from way back, so when I came across this recipe for parsnip and pear latkes, I was practically out the door to buy a pear in the next second. And oh my, they are so good—crispy, a little sweet from the pear, salty, and delicious. I added bacon, onion, and rosemary to the original recipe ingredients, and if that works for you, I highly recommend it. If not, even without bacon, I can’t imagine these still not being amazing. Just sauté the onion in a little olive oil and continue on from there. Note that these are a little tricky to keep together. You can either add an extra egg white or a whole egg to the batter, or just be very gentle with flipping them over; be prepared to be okay with one or two pancakes falling apart.” 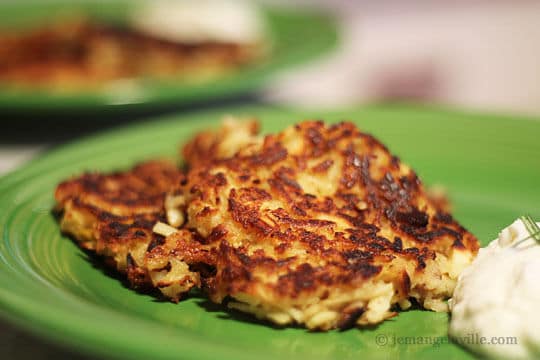