Stumped in the Kitchen? New CSA Cookbooks to Choose From!

What the hell do I do with kohlrabi, a neighbor asked Georgia chef-restaurateur Hugh Acheson. Others asked, too, and this led him to write The Broad Fork: Recipes for the Wide World of Vegetables and Fruits. Among lovers of fresh, local produce, who hasn’t been stumped by what to do with some unfamiliar item in […]

What the hell do I do with kohlrabi, a neighbor asked Georgia chef-restaurateur Hugh Acheson. Others asked, too, and this led him to write The Broad Fork: Recipes for the Wide World of Vegetables and Fruits.

Among lovers of fresh, local produce, who hasn’t been stumped by what to do with some unfamiliar item in a CSA box or farmers market display—root or bulb, beanlike pod, stalk or leafy green? What should we do with those yardlong beans, salsify, ramps, or yacon (yes, yacon!), or slightly less exotic items like fresh fava beans or daikon radish? Of course, these questions also led to Bounty From the Box: The CSA Farm Cookbook. More about that as you continue reading!

There’s no better time to expand your vegetable repertoire with one or more of the vegetable-centric (not necessarily vegetarian) cookbooks written with CSA subscribers and farmers market shoppers in mind.

The predecessors of today’s veg-centric cookbooks

Perhaps you have a well-worn copy of The Victory Garden Cookbook, as I do, by Marian Morash, published in 1982. Or maybe you own the first of the CSA-affiliated cookbooks: From Asparagus to Zucchini: A Guide to Cooking Farm-Fresh Seasonal Produce, published in 1996 by Madison (WI) Area CSA Coalition, which later became the nonprofit Fairshare CSA Coalition. The book has had staying power; the revised third edition, published in 2004, has 420 straightforward recipes for more than 50 vegetables and herbs, as well as good information on the benefits of CSAs, eating locally, and cooking in season. Recipes were contributed by growers, CSA members, home cooks, and chefs.

In 2013, the Fairshare CSA Coalition published a companion book, also in paperback, called Farm-Fresh and Fast: Easy Recipes and Tips for Making the Most of Fresh, Seasonal Foods, offering recipes for 78 fruits and vegetables organized by plant anatomy, such as root vegetables, stalks and shoots, leafy greens, sweet fruits, and fruits eaten as vegetables. Also featured are master recipes with variations for favorites like pesto and chilled summer soups, more cooking tips, and black-and-white photos.

The Broad Fork, published this year, is the third cookbook for James Beard Award-winning chef and restaurateur Hugh Acheson. He not only helps cooks figure out what to do with kohlrabi (puree, steam, or “slaw” it) and 49 other vegetables—he serves up stories about his family, his local CSA, and plenty more. He defends the goodness of kale: “Was kale salad really just ‘last year’s trend’? … We have to fight for the goodness. I can deal with the backlash against the kale chips … but keep your paws off my salad.”

Acheson offers four recipes for every vegetable or fruit—three fairly simple, one more elaborate. You’ll find grits and other Southern fare, but also plenty of influence from other cuisines and an overall healthful style of cooking. The book is organized by season, with plenty of beautiful color photos. 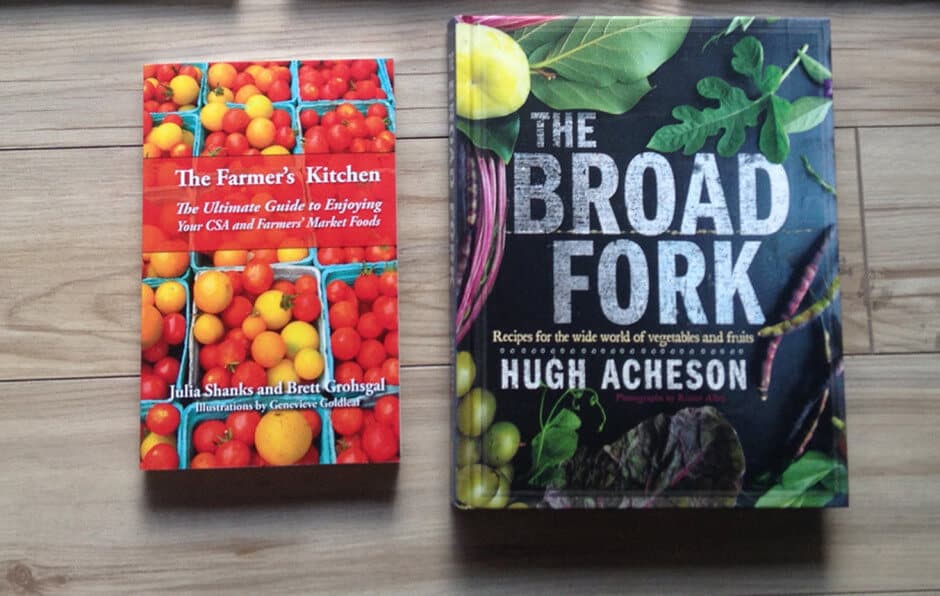 Also new this year is The CSA Cookbook: No-Waste Recipes for Cooking Your Way Through a Community Supported Agriculture Box, Farmers’ Market, or Backyard Bounty by Linda Ly, who blogs about cooking, gardening, and raising backyard chickens at www.gardenbetty.com. Ly is not exaggerating when she refers to no-waste recipes. She grew up in a Chinese-Vietnamese family that used every part of vegetables, both for economy and variety of flavor. Adopting the nose-to-tail recipe approach now popular with butchers, she uses ingredients such as chard stalks (hummus and frittata), carrot tops (salads and salsa), and even fennel fronds and kale stems (pesto). The 100-plus recipes are accompanied by stunning color photos and are organized by vegetable anatomy; many have an Asian influence.

The 200-plus vegetable and fruit recipes in the revised 2012 edition were selected to be easy to prepare or at least straightforward. As with the other cookbooks mentioned, you can expect a wide range of produce and recipes, from Classic Southern Style Greens to Coconut-Sorrel Soup with Shrimp or Chicken. Savory recipes are organized alphabetically by primary ingredient, with separate sections at the end for sauces and dressings, desserts, and beverages. At the front of the book are helpful chapters describing varieties of fruits, vegetables, and herbs and providing guidance on best storage methods. The vegetable illustrations are helpful; there are no photographs.

A different kind of CSA cookbook

If you want more than a cookbook and are curious about CSA farms and the good work they’re doing from Alaska to Hawaii, look for the upcoming book featured on this website, Bounty from the Box: The CSA Farm Cookbook by Mi Ae Lipe. It’s a follow-up to her 2008 Tastes from Valley to Bluff: The Featherstone Farm Cookbook, which focused on one well-established Minnesota CSA farm.

Arranged by season, Bounty from the Box offers over 350 delicious ethnic and traditional recipes from a wide variety of professional and home cooks. Most of the recipes are simple to prepare, while others take a bit more effort, but, along with informal serving suggestions, all of them should inspire you to get out of your usual rut with fresh produce. Many are vegetarian, vegan, and gluten-free. Nearly 90 fruits, vegetables, and herbs are covered, including some unusual ones such as water spinach and lychees. Each crop chapter features comprehensive, practical information on history, nutrition, selection, storage, cleaning, and numerous cooking techniques specific to that crop.

Unique among this genre of cookbooks is its extensive coverage of diverse CSA farms across the country and the work they do in not only growing food, but also supporting their communities with training, employment, education, food distribution networks, payment options for people in need, and environmental stewardship—sometimes in unexpected, inspiring ways. The book also offers profiles of farms and farmers, as well as glimpses into many issues related to food and farming, including nutrition, farming practices, farming challenges, and the sheer diversity of our CSAs.

All of these cookbooks answer the what-to-do-with questions of produce you might be stumped by, but we all have different preferences when choosing a cookbook. You might be someone who prefers cookbooks with recipe photos, or likes the idea of reducing produce waste in your cooking. Many of you may want to learn more about the challenges of how your food gets from the field to your plate and consider how to get involved. Whatever your fancy, there’s no excuse for not picking up that kohlrabi and having some fun with it!

Bounty from the Box will be available in print later this summer; however, if you are reading this post now, you may know that it already has an extensive website that includes a resource directory where you can find CSA farms, cooking blogs, food advocacy organizations, and many other useful links. There’s a place to search for recipes and even share your own. In the coming months, as more recipes and resources are posted, we really want your contributions and suggestions as well!