In the United States, millions of pumpkins are carved every autumn into fanciful jack-o’-lanterns, their flesh baked to make pumpkin pie, and their seeds roasted as a seasonal snack. Post-Halloweeners that didn’t sell get sent to feed livestock. In Europe, Latin America, the Caribbean, and parts of Asia, however, pumpkins are used more widely in […] 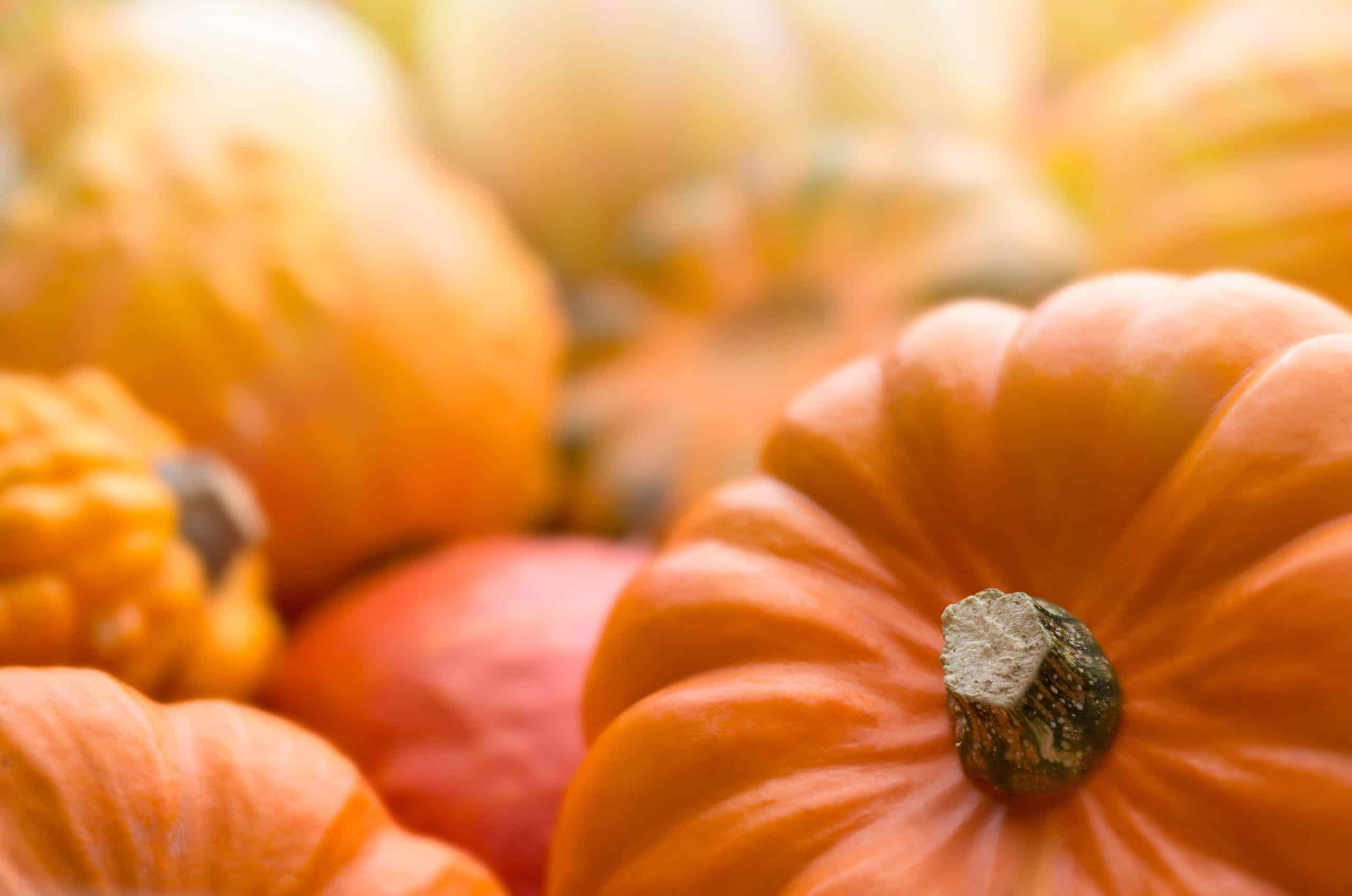 In the United States, millions of pumpkins are carved every autumn into fanciful jack-o’-lanterns, their flesh baked to make pumpkin pie, and their seeds roasted as a seasonal snack. Post-Halloweeners that didn’t sell get sent to feed livestock. In Europe, Latin America, the Caribbean, and parts of Asia, however, pumpkins are used more widely in cooking, especially as a stand-alone dish or in stews. Shelled, roasted pumpkin seeds are commonly found in Latin American markets as pepitas.

Some CSA farms grow pie pumpkins, sometimes known as sugar pumpkins or sugar pie pumpkins. These fruits are especially bred for cooking and baking, with a higher sugar content and more convenient size than the larger pumpkin varieties.

History
The pumpkin probably originated in Central America; seeds from its ancestors have been found in Mexico and carbon-dated to 5500 bce. Native American peoples used pumpkin as a staple food along with other squashes, maize, and beans, and introduced the plant to European settlers in the 17th century. (Incidentally, throughout history, pumpkins have been constantly confused with and referred to interchangeably with other gourds and hard-skinned squashes.)

The tradition of jack-o’-lanterns began in the British Isles, when various hollowed-out vegetables like turnips, mangel-wurzels, beets, and potatoes were used as lanterns. Irish folklore has it that a lazy, stingy farmer named Jack strikes a deal with the devil to never let him into hell. When Jack dies, he is refused admittance into heaven, and the devil keeps his promise, leaving Jack no choice but to forever wander the earth, carrying a carved-out turnip with a candle inside it to light his way.

Legend aside, the term “jack-o’-lantern” originally referred to a night watchman. When the Irish arrived in America in the 1800s, they presumably found pumpkins easier to hollow out than turnips.

Nutrition
Pumpkins are among the richest plant sources of vitamin A, which comes in the form of beta-carotene. They also contain potassium and vitamin C. A single-cup serving contains 30 calories. The seeds are even greater nutritional powerhouses, with ¼ cup containing 72 calories, plus half of the adult daily requirement for manganese, 45 percent for magnesium, and 40 percent for phosphorus, and significant amounts of tryptophan, iron, copper, zinc, vitamin K, protein, and monounsaturated fat.

Selection and Storage
Choose heavy fruits that are uniformly hard, with no soft, shriveled, or bruised areas. Steer clear of pumpkins developing moldy patches, and check the undersides or spots on which they are resting for potential problem areas. Discoloration or scabbing is not necessarily a sign that the flavor is affected; just inspect for softening or rot.

Pumpkins are best stored in cool, dry places, such as a basement or a root cellar with the proper temperature and lack of humidity. The cooler the temperature, the longer pumpkins will keep. At room temperature they can last for several weeks, or at 40°F to 50°F for several months. They should remain unwashed until ready to use. Refrigerate after cutting.

Trimming and Cleaning
If you are carving a pumpkin, you will be cutting off its top and scooping out its seeds. Scrape the flesh clear of seeds and their associated stringy pulp, and cut into 1½-inch chunks. If you won’t be making a jack-o’-lantern, then cut the entire pumpkin into wedges and remove the flesh in large sections with a heavy, sharp knife. Then boil the chunks until tender.

Steaming and Boiling
Steam 1½- to 2-inch chunks for 15 to 20 minutes. Or boil 1½-inch chunks in rapidly boiling salted water for 8 to 10 minutes, or until they become tender. This pumpkin is then ready to use as-is, or it can be pureed or mashed like potatoes. Because freshly cooked pumpkin tends to be quite watery, draining is a must; place mashed pumpkin in a fine-meshed colander suspended over a bowl and refrigerate for at least 1 hour. 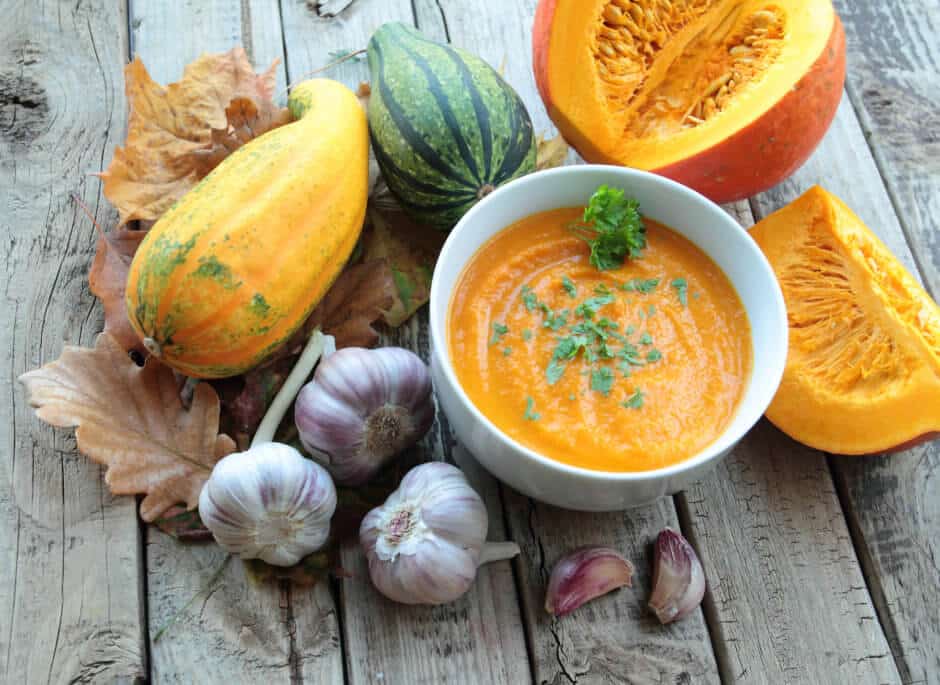 Stir-Frying and Sautéing
It may surprise you that not only can pumpkin be stir-fried, but it is a popular dish in Southeast Asia. Cut pumpkin into ½-inch or bite-size pieces and stir-fry with mustard oil, red chiles, ginger, sugar, turmeric, coriander, cumin, and salt for 3 to 5 minutes, or until the pumpkin is tender but still slightly al dente.

Baking and Roasting
Large jack-o’-lantern pumpkins are not the best candidates for baking, as they are bred for large size rather than appetizing flavor and texture. Sugar or pie pumpkins are better for home baking, as they average about 4 to 8 pounds and their flesh is sweeter and far less stringy. Because hacking through the skin of a raw pumpkin sometimes requires tools like keyhole saws and wood gouges (according to Martha Stewart), baking the whole pumpkin to soften it first makes life far more pleasant (and safer).

To prepare, use a sharp chef’s knife to make a shallow cut between the stem and blossom end on both sides. Penetrate slowly and carefully until the two halves start to separate, then cut the rest of the way through and pull apart. Cut off the stem, scoop out the seeds, and slice the pumpkin halves crosswise in half. Arrange the pumpkin pieces in a shallow roasting pan or a baking sheet with a high rim. Pour in 1½ cups of water and bake at 375°F, uncovered, for 1 to 1½ hours or until very tender.

Sugar pumpkins can also be baked whole. Pierce the skin in several places with a sharp knife (exploding pumpkins are not much fun in the kitchen), then place the pumpkin on a baking sheet and bake for about 2 hours at 350°F, or until the flesh can be easily pierced with a knife or fork.

What Can You Do with Pumpkin?

You can also try this very simple but satisfying soup: Pumpkin-Ginger Soup. And you can find more tasty pumpkin recipes in Bounty from the Box: The CSA Farm Cookbook.